According to a news article published yesterday in California, the San Diego Zoo's female elephants "are all on contraception. The advanced age could cause complications during a pregnancy, so the decision was made to put them on contraception."

It was announced in December 2010 that Tina and Jewel, new residents to the Los Angeles Zoo, were also put on contraception if they are later to mix with the zoo's young male Asian elephant, Billy.

Does anyone have more information regarding other elephants in American (or world) zoos that are also on contraception to prevent births? 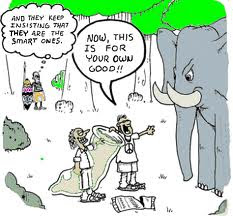 "Knoxville Zoo worker dies after elephant pushes her into stall"

"Stephanie James loved animals - whether it was the horses she used to take care of as a child, her dog she rescued from being euthanized or the elephants that she cared for daily at the Knoxville Zoo.

"That was her life," her father, Ron James, said by telephone Friday evening. "It was just her goal in life to take care of animals and be around them."

On Friday, Stephanie James, 33, was killed when one of the elephants she was working with pushed her into a stall. James, who had worked at the zoo for two years, died as a result of internal injuries after being rushed to the University of Tennessee Medical Center." 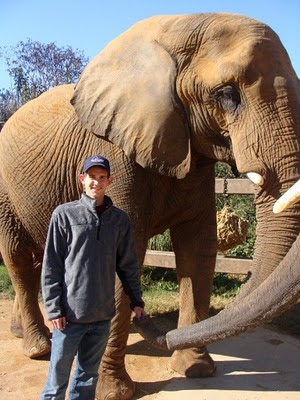 "For elephants that miss the circus cut, Florida becomes home"

"Angelica, the pregnant one, is grabbing the lock of her paddock with her trunk. Fortysomething Sid, the diva, is hanging with Aree, the young one who can't concentrate. A few pens over, Mala is ready to make babies, so she's been put together with Romeo.

These are the Asian elephants who were left behind. The ones who didn't make the Greatest Show on Earth, which concludes its stop in Tampa on Sunday.

Thirty-three of Ringling Bros.' Asian elephants live here, off a two-lane road in Polk County, at the Center for Elephant Conservation. The oldest is 66. The youngest, 8 months.

At the circus inside the St. Pete Times Forum in Tampa this weekend, amid the splash of lights, the loud music, the glittery costumed performers, the chosen ones will parade trunk-to-tail through the Big Top.

But here, in the winter-drab fields of middle Florida, are those that didn't quite make it — they're too old, too young or too distracted. They are the largest herd of Asian elephants in the western hemisphere."

The Nay Aug Park Zoo of northeast Pennsylvania acquired their first elephant, Queenie, in 1924. The children of Scranton facilitated a city-wide effort to collect change, funding the purchase. Four female Asian elephants in total were acquired this way, each subsequent animal being purchased within a month of the previous elephant's demise. The zoo built a new elephant enclosure in 1938, several years after the arrival of their second elephant, Tillie. Princess arrived from Iowa in 1966 and lived until 1971, replaced with the zoo's final elephant Toni. Following the closure of the Nay Aug Park Zoo in 1988, Toni was transferred to the Smithsonian National Zoo in Washington, D.C. 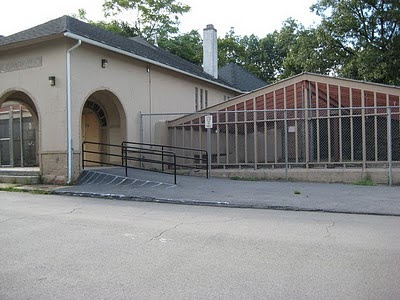 Queenie
The children of Scranton, Pennsylvania, contributed over $3600 in change to purchase the Nay Aug Park Zoo's first elephant. Queenie arrived in June 1926 from Germany and resided at the zoo until her death in May 1935 due to acute enteritis, or inflammation of the bowels caused by a bacterial infection. 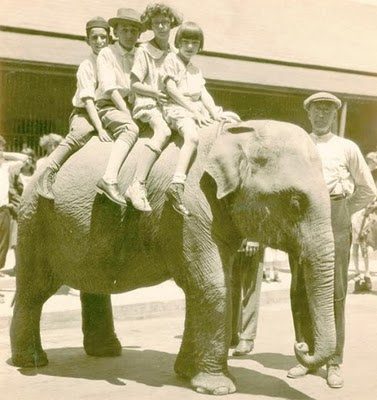 Nay Aug's first elephant, Queenie, was bought after a region wide fundraiser garnered more than $3,000. She was greeted by a crowd of about 25,000 people.
Photo Courtesy of The Times-Tribune

Tillie
Following the death of the Nay Aug Park Zoo's first elephant Queenie in May 1935, the city began another fundraiser to purchase a replacement elephant. Tillie was purchased from the John Benson Wild Animal Farm in New Hampshire, along with her companion donkey, Joshua.

In 1938, the Nay Aug Park Zoo celebrated Tillie's eighth birthday and built a new enclosure for her and the donkey via the Works Project Administration. The following year, an ailing Tillie was diagnosed by Larry Davis of Ringling Brothers and Barnum & Bailey Circus with a 'cold of the kidneys' due to the concrete flooring in the barn. It was replaced with wood. The donkey died twenty years later in December 1958.

In February 1966, Tillie slammed zookeeper George Lowry into a wall with her trunk. She was euthanized later that year (before September), though it is unknown whether it was due to her more aggressive nature or her infected and abscessed feet. 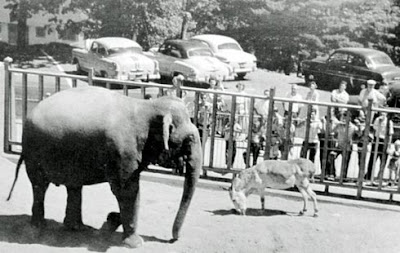 1949: Tillie, the dancing elephant, and her donkey companion, Joshua, are photographed with some visitors to Nay Aug Park Zoo.
Photo Courtesy of The Times-Tribune

Princess Penny
In late 1966, Scranton began a third campaign to purchase a replacement elephant. The Nay Aug Zoo's second elephant Tillie had shortly before been euthanized. Baby elephant Princess Penny arrived in Scranton in September 1966, though died less than five years later in July 1971 due to extensive bloating. 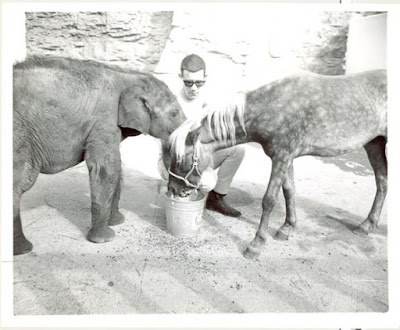 Princess Penny and Jack, a 1-year-old pony who was on a trial visit to the Nay Aug Zoo, get acquainted under the watchful eye of director George Lowry.
Photo Courtesy of The Times-Tribune

Toni
After the death of Princess in July 1971, Scranton held their final campaign to replace an elephant for the Nay Aug Park Zoo in Pennsylvania. Toni was purchased from the Children's Zoo in Des Moines, Iowa, where she had previously resided for several years.

Toni was transferred to the National Zoo in October 1989 after the closing of the Nay Aug Park Zoo in Pennsylvania. Nay Aug Park Zoo officials originally planned to transfer Toni to Canada, but city residents persuaded to keep her in America. She, just as the other three elephants of the zoo in Scranton, had previously been kept as a single elephant in a concrete enclosure with a concrete yard.

Toni was again the center of debate in 1993 when zoo officials desired to send the twenty six year old animal to Los Angeles to breed with a male. Some Scranton residents desired Toni to eventually return to their town and argued she was too old to bear a calf. The plan never came to fruition.

Toni had sustained an injury to her left front leg in 1975 at the Nay Aug Park Zoo, a problem that eventually lead to her death in January 2006 at the National Zoo. She had previously been successfully treated there for acute kidney disease in 2001. 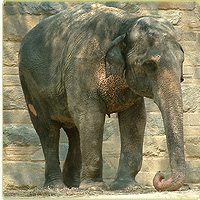 Toni was a small elephant, and at her peak weighed between 6,000 and 6,500 pounds.
Photo Courtesy of the Smithsonian National Zoo

Contradictory Records
Very little information is listed about Tillie and Princess Penny in the North American Regional Studbook for the Asian Elephant. Both elephants are listed with a Temporary Studbook Number, lacking "supporting documentation to validate their identities." Both elephants are also listed as "Lost-to-Follow up," or a "documented animal whose current location is unknown."

The North American Asian Elephant SSP also lists an elephant named Ruth, arriving at the Nay Aug Park Zoo in 1941. She is also listed with both with a Temporary Studbook Number and Lost-to-Follow up. No further information has been found regarding this animal or her existence.

The news article documenting the history of Nay Aug Park Zoo's elephants states Tillie celebrated her eighth birthday in 1938, though they later state she turned forty two between 1965-1966. The North American SSP lists her birth as 1924. The same article also states Tillie was put down in 1966 after she attacked her keeper. A different news article states the "aged and arthritic" animal was euthanized in 1971. She was first given a shot of curare and then a shot of nicotine before she finally died from a bullet shot to her head. If Tillie in fact died in 1971 and not in 1966, this diminishes the Cheryl Kashuba's statement that each elephant at the Nay Aug Park Zoo was solitary and was a successor to the previous resident. Tillie and Princess Penny would have resided together from 1966 to 1971 until they both died that year, replaced by Toni.

The author of the main article for the basis of this research, Cheryl Kashuba, could not be reached to further discuss these animals or discrepancies therein regarding this information.

Karen Lewis, Conservation Program Assistant for the Oregon Zoo and responsible for the maintenance of the North American Regional Studbook for the Asian Elephant, has been contacted with this updated information. As stated in the 2010 Studbook, "In our continuing efforts to validate all of the undocumented elephants, we would like to solicit your help by requesting that you review both of these [Lost to Follow up and Undocumented] sections and provide us with any information that might help us locate the elephants that have been lost to follow up, validate the undocumented elephants, or lead us to someone who might be able to provide this information."