Indianapolis' first zoo opened in 1964 and exhibited animals until its closure and subsequent transfer to a new site in 1988. This facility first exhibited Asian elephants, before switching to African elephants. Generally speaking, only a single elephant was exhibited with a few instances of two for short time periods.

The Bernstein Park Zoo, fomerly located in Monroe, Louisiana, was shut down in 1967 for renovation. It reopened as the Louisiana Purchase Zoo.

A November 1969 news article states the Bernstein Park's elephant died recently. No further information is found regarding the identity or history of this animal. A 1963 news article describes the Elephant House as a "recent development." The 1969 article also references a new elephant is slated to arrive to replace its predesser. Information is only available on two elephants for this facility prior to the discovery of this news article - Michelle and Shirley.

The female Asian elephant Michelle is listed in the North American Regional Studbook for the Asian Elephant with a death date of ~1975. The Murray Hill records compilation lists a more accurate date of July 1974 due to severe arthritis. No further information is available regarding the history of this elephant.

Shirley's history is well-documented from her arrival to the Al G. Kelly-Miller Bros. Circus in 1954 to her eventual retirement to the Louisiana Purchase Zoo in 1977 and relocation to The Elephant Sanctuary in 1999 where she resides to this day.


Further information is sought regarding Michelle and her predecessor.

The following photos, taken by James Cole, were taken on Rudy Bros. Circus in 1973 in Boston, Massachusetts. Pictured are Eloise Berchtold in Ring 3, Morgan Berry in Center Ring and ( believed to be ) Judy Jacobs in Ring 1. 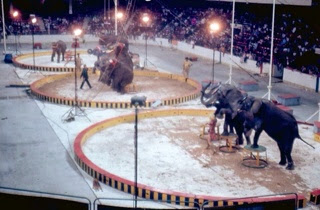 Morgan Berry's infamous all-male elephant act at this time consisted of Teak, Thai, Tunga, Buddah and Ranchipur. He owned another male Asian Sahib who, per the North American Regional Studbook for the Asian Elephant, was on loan to Wildlife Safari in Winston, Oregon, for a ride contract. His female Asian Abbey / Me Thai was leased to Hartzell Bros. Circus per the recent research of Bob Cline.
The African elephanrs worked by Eloise, also owned by Berry, consisted of two females and a male - Owala, Shambi and Durga. 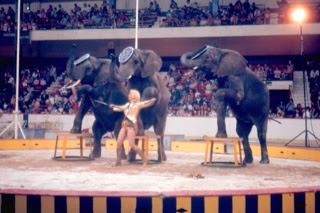 The presumed Jacobs elephants would be Dolly and Dumbo. Tina died the previous year in Canada. Peggy was purchased the following month from DR Miller's Carson & Barnes Circus.
Posted Friday, May 09, 2014 0 comments