A news article published in September 2000 documents the confiscation of an elephant by the United States Department of Agriculture from Jim Stephens, owner of Water Wheel Exotics, Inc.

Photo Courtesy of Pittsburgh Post Gazette, 09/04/2000
This "traveling wildlife menagerie" was based near Washington, Pennsylvania. No further information is given about this animal - species, name, age, gender - only "an elephant." 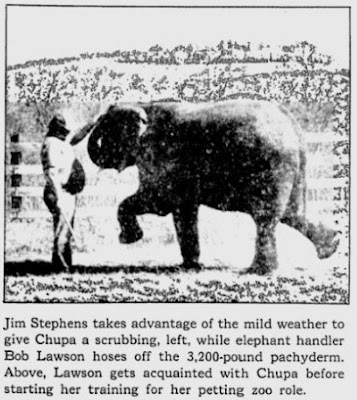 Photo Courtesy of Pittsburgh Press, 02/08/1989
Further information regarding the identity of the reported "confiscated elephant" is sought.
Posted Saturday, July 21, 2012