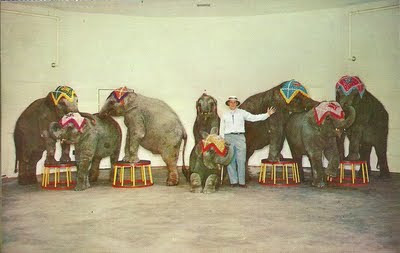 Five of the 8 (Alice, Pumie, Trudy/Trudie, Clara and Marie) appeared in the Zoo's first Elephant Show, 1959.

Eleanor did not stay long at the Muscatine zoo. By 1960, she was sold to the Clyde Beatty-Cole Bros. Circus. Dave Price identified the elephant in the truck when the circus purchased a second elephant in the same trip - Sally from Al G. Kelly-Miller Bros. Circus. Retired elephant trainer Buckles Woodcock confirms the story, adding Sally had been sold to Clyde Beatty himself for his Florida park and that a second elephant was already in the truck.

Eleanor's tenure with the Beatty show was again short, and no information is available at this time if she toured or had a different name. By 1962, she was listed under show owner Howard Suesz with the name 'Punk,' according to the North American Regional Studbook for the Asian Elephant.

Mr. Woodcock mentioned, regarding the second elephant in the truck during Sally's loading, that she was a "pretty sorry specimen" and later with Little Bob Stevens' show. Jim Lacklore, in a 1974 Bandwagon article about show owner Bill Griffth, has Punk identified with the Sells Bros. Circus in 1962. This show was a joint venture between Bill Griffith and Little Bob Stevens, touring from 1962 to 1964. Punk, along with two other elephants ( Freida and Parrie ) were leased from Howard Suesz.

A separate Bandwagon article, published during Sells' 1962 season, lists a different group of elephants with the show - Freida, Terry and Maude. This contradictory information confirms the animals were leased from Hagen Brothers Circus ( more specifically, a cage truck and elephant truck ). It also adds Louis McNeese had a "bull" on the show. Returning to Jim Lacklore's article, four elephant acts were presented on the animal-populous show - Dyna with Louie McNeese, Woodcock's Barbershop Elephants with Buckles and Barbara Woodcock, the Sells Bros. elephants with Captain Don Lee and Woodcock's elephants featuring Barbara Ann.

The only reference to an elephant "Parrie" is found in the same article discussing Bill Griffith. This animal seems to be more commonly known as "Terry." The Murray Hill records compilation list Terry with Howard Suesz from 1959 to 1962, originating from an animal importer. An August 1959 Billboard article lists her as one of three elephants with Howard Suesz's Hagen Bros. Circus. Elizabeth and Freida, former James M. Cole elephants, were on the show for exhibition and work purposes only; Terry was the sole performer of the group. A fourth animal, Elsie ( acquired from the Al G. Kelly-Miller Bros. Circus ) died the same year. Elephant superintendent was Robert Every. Veteran bear trainer was with the show at the time. He confirms Parrie and Terry were the same animal ( correctly Terry ) and that there was no Maude.

If the Jim Lacklore version is followed, Punk performed with Sells Bros. until fall 1964 when the show's two owners dissolved their partnership. With all property divided, Bill Griffith received all the animals at his request. Lacklore lists three elephants transferred in the negotiation - Freida, Topsy and Punk. Punk and Fredia were two of the original members of the Sells Bros. herd per Lacklore; no further information is available regarding the death or transfer of Terry / Parrie. Topsy, an animal with a long show history dating back to 1927, was acquired by Stevens & Griffith in 1964 from Dale Madden. The inaugural tour for Griffith's new show, Birnam Brothers Circus, in 1965 featured a different herd still. A day prior to opening, Freida died at the show's quarters; leaving Topsy and Punk with the show, along with Louie McNeece and his elephant Norma.

Following the 1965 Birnam Bros. Circus tour, Punk / Eleanor is lost for several years on the records. From this point forward, many name and ownership changes came into play, making tracking this elephant's history very difficult. Referencing many different sources and making educated guesses gives an attempted follow-along of Eleanor's story.

It seems the names Sheba, Babe and Punk all come into play to track this animal from the late 1960s to mid 1970s until she is lost again. C.J. "Boots" Madden of Gainesville, Texas, is listed in two Amusement Business elephant censuses ( 05/1969, 11/1972 ) with a single elephant Sheba. The Murray Hill records compilation indicate this animal ( Sheba ) was sold to John Lewis for his Lewis Bros. Circus in November 1972. John Lewis, in his inquiry to ShowMe Elephants on Facebook, states he purchased the elephant Babe from the Madden brothers in late 1972. The Chang Reynolds file at Circus World Museum lists Babe with Toby's Circus in 1972 and then to Lewis Bros. Circus in 1973 at 25 years of age. The late circus performer Bobby Fairchild recalled that Babe was blind in one eye. It seems, from these three acounts, Babe and Sheba were the same animal. Returning to the narration of John Lewis, the Lewis Bros. show was built at the Mission, Texas, winter quarters of animal handler Bobby Gibbs. Once partnering with Jimmy Silverlake, the quarters were moved to Medora, Indiana, formerly home of the Clark and Walters Circus. There are different versions of what happened next, but John Lewis returned to Hoxie Brothers Circus and Lewis Bros. came into the singular hands of Jimmy Silverlake, subsequently called the Barnes & Dailey Circus. Following this show title, the Buckles Woodcock records list the elephant Babe on this show from 1974 to 1975. The late BK Silverlake told the author Punk was on Jimmy Silverlake's Lewis Bros. Circus, possibly called Babe then. the animal had another name when younger. She told that Jimmy took out Lewis Bros. in 1973 and 1974.

The Barnes & Dailey Circus was sold twice in late 1974 per a December 1974 article in Circus Report. It was first reported sold the month prior to Hoxie Tucker and then later to Parley Baer and Bob Trippe. The show, under its new ownership, was renamed the "Mid-America" Circus, Inc. Parley Baer ran operations and management with Bob Trippe operating promotion and booking. The formaer owner/operator Jim Silverlake remained as superintendent. A Circus Report article five months later reiterates the same ownership and adds there were two elephants on the show - Babe and Queen with handler Tex Goetsch.

There is no further record at this time regarding what became of this animal. Returning to the Murray Hill records, Boots Madden is listed with the elephant Punk in 1970, followed by a notation she was sold to Mexico and died ( but without a mentioned time frame ). The aforementioned Queen on the Mid-America Circus also has no further information regarding her history before or after this show.

Note from the author:
It took me a long time to work on this article, due to both a busy work schedule and the complicated history of this animal. I was pressed to finish it today following a service last weekend for the late BK Silverlake of Hugo, Oklahoma. Several years ago, I offered to take BK out for lunch in exchange for some elephant stories from the numerous shows she both worked on and owned in the past. As we parted, she mentioned one last item - Punk was on Jimmy Silverlake's Lewis Bros. Circus, possibly called Babe then?; she had another name when younger; Jimmy took out Lewis Bros. in 1973 and 1974.

This statement did not mean much to me at the time. I had no idea which animal she was speaking of, nor did I have any idea it would tie into the St. Louis Zoo elephant history, a program which my family became a part of when my father took the position of third and last elephant trainer over twenty years ago.

Buckles Woodcock, the well-respected and premier elephant historian of our time once said, "Re-reading this it comes out very complicated but the hard core elephant buff may be able to make sense out of it." This could not be any more an accurate statement than regarding an elephant by the names of Eleanor, Cinderella, Punk, Sheba and Babe.