Bodhi was born in April 2004, the first successful birth at the Columbus Zoo. He was born to Coco and seventeen year old Phoebe, an elephant originally born at the Ramat Gan Zoo in Israel. He has resided at the Columbus Zoo his entire life and is managed in protected contact. 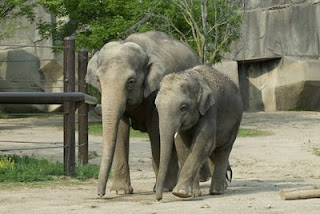 Phoebe and Bodhi, October 2008.
Photo Courtesy of the Columbus Zoo on Facebook

Family History
In May 1993, Charlie Gray imported the pregnant sisters Phoebe and Lilly together from Ramat Gan for the African Lion Safari in Cambridge, Canada. Six year old Phoebe miscarried the calf (sired by her father) in November 1993. Eight year old Lilly gave birth to her calf Piccolo in December 1994 (sired by her full brother Alexander).

In October 1999, Phoebe gave birth to her first successful calf George in Canada, sired by Calvin before his tranfer to Germany in March 2000. 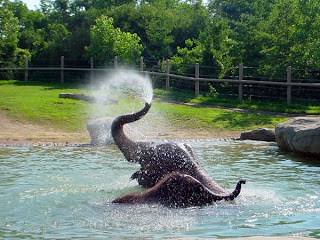 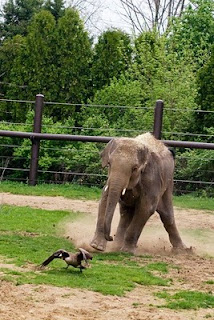 "Bodhi demonstrating to a Canada goose what being a young bull is all about," July 2010.
Photo Courtesy of Harry Peachey