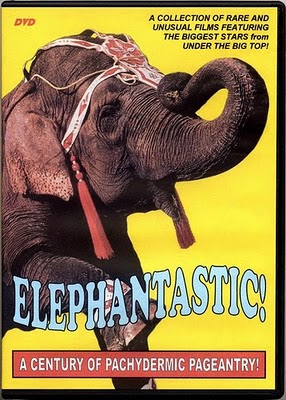 Clocking in at just under two full hours, this magnificent collection of all things pachyderm contains 28 different elephant acts (some partial and many complete), in addition to several additional accompanying vignettes filmed on various shows around the world. Among those featured in performance are trainers DANIEL SUSKOV working the Tarzan Zerbini elephants (1990) - OSCAR and MARIAN CRISTIANI, filmed in 1969 on Rudy Bros. Circus, in Honolulu - CHICO WILLIAMS and DELILAH WOODCOCK with “TOTO” the elephant, as captured on New York’s famous Big Apple Circus (1984) - KAYE'S HOLLYWOOD ELEPHANTS with Judy Kaye, also shot in Hawaii with the E.K. Fernandez Circus - BOBBY and ROSA GIBBS at Baraboo’s Circus World Museum in the mid-1970's - JEAN SCHMITT with the Ringling Barnum Circus World herd (Orlando, FL) - PHIL and FRANCINE SCACHT with “DONDI” from a Chicagoland TV special (1986); REX and AVA WILLIAMS with the Clyde Beatty-Cole Bros. elephants on the 1967 TV show, "Coliseum" - BUCKLES and BARBARA WOODCOCK working the RBBB herd in 1978 - JENDE SMAHA with “Bertha” and “Tina” from a rare Hollywood Palace kinescope, and several others.

A number of global offerings are included, as well, such as KENNY BENNEWEIS and Denmark’s renowned Circus Benneweis elephants (1992) – the CEASAR TOGNI elephants, from a 1960's episode of Don Ameche's "Int'l Showtime" - MARY CHIPPERFIELD working a single elephant with a canine sidekick - BOBBY ROBERTS and the Robert Bros. Circus elephants from England, and so on.

An extreme rarity, also featured in this already top-heavy program, is a wonderful piece of vintage 16mm film showing MACK and PEGGY MacDONALD training the legendary Polack Bros. Circus “Beasalou Elephants” at their home, in San Antonio, Texas, in 1963. No spangles or make-up here: just fascinating, intimate footage never before seen, shot nearly fifty years ago. There is even a short clip of Mack and Peggy working with TOMMY HANNEFORD and baby “INA,” also in Texas.

ELEPHANTASTIC! is a compilation of privately shot 8mm, Super 8mm, and 16mm films, some of which date way back (i.e: a 1908 film of "Jumbo" the elephant, working on a vaudeville stage in Chicago), videotapes, and vintage television appearances from the U.S., Mexico, and Europe. Never before has there been such a comprehensive collection of outstanding, one-of-a-kind elephant footage offered! Break out the peanuts, sit back, and wrap yourself up in trunk-loads of tantalizing tricks! 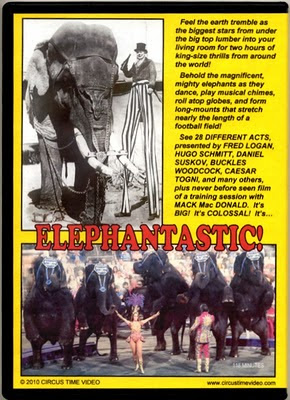 This new compilation produced by Timothy N Tegge can be ordered online at CircusTimeVideo.com for $19.95. A check or money order may also be sent to P.O. Box 661 - Baraboo, WI 53913. Make them out to either Circus Time video or Timothy Tegge. If you cannot see this for sale on the site yet, check back! This is a brand new release and should be available for viewing by Monday, December 13.