"IT'S A GIRL! Meet our brand new bundle of joy. An Asian elephant was born today, June 24, at 1:13 p.m. Mother and baby are bonding very well, but are not yet on public display. The height and weight of the calf are not yet confirmed. We will announce a baby naming poll at a later date. More info: http://ow.ly/5pVW7 Photo by Keeper Katie Pilgram." //St. Louis Zoo on Facebook 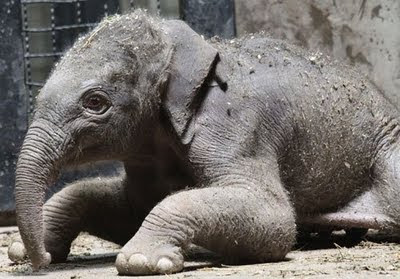 By the numbers, the St. Louis Zoo has celebrated a very successful elephant breeding program. Their first calf, a male, was born in the early 1990s following an 18 month breeding loan of two females to a facility housing a breeding bull. A new facility was constructed in St. Louis to house the zoo's maturing male and to acquire more breeding age females. This new compound made its debut in 2002 following the acquisition of three female Asian elephants from Washington and Florida. All three bred with Raja and pregnancies occurred. The female from the Seattle zoo retained her stillborn fetus in utero, but the mother/daughter pair from the Jacksonville Zoo have successfully given birth to three female calves. A fourth fetus to one of these two was aborted mid-pregnancy.

In essence, the St. Louis Zoo's first calf, a male, would become the staple of a new breeding program for the endangered Asian elephant. Once matured and a new facility constructed, he would be responsible for three successful births from five pregnancies to three females would all beget female calves, animals capable of staying with the herd and not necessitating relocation once older. Relative to other elephant breeding facilities (whether through natural breeding or artificial insemination), this is very fortunate for the Missouri facility, as opposed to locations such as Columbus, San Diego and Toledo, whose majority, if not totality, of births have resulted in males.

Additionally, the St. Louis Zoo's breeding bull Raja represents gene's not prevalent in the North American Species Survival Plan. Although one of five male calves sired by his father Onyx, Raja is the only animal of the group to survive past the age of three. Of the remaining seven female calves sired by the Springfield bull, only three are still living, two of which have given birth to their own calves to bulls without other surviving offspring. Nine captive-born elephants are surviving direct descendents of founder breeder Onyx - four first generation and five second generation.

Although the Elephant Endotheliotropic Herpesvirus is prevalent in this group of animals sired by Onyx and responsible for the majority of the deaths of those sired, the St. Louis Zoo has twice successfully battled the disease with one of their calves. Another tests positive for exposure to the disease but has never experienced symptoms.
Posted Friday, July 08, 2011