I don't know much about the Chipperfield's Elephants history. The only ones I know are Kamala, Lechmee and Meena that are actually on the road with the French Cirque Medrano. These three went to the States to join RBBB with Graham Thomas Chipperfield. They did a teeterboard act.

See you somewhere down the road!
Vince 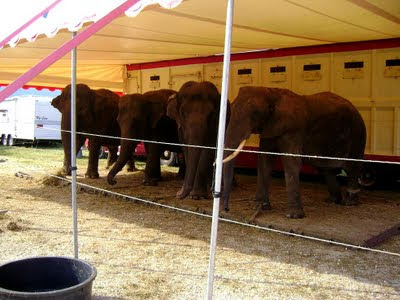 On the picture Medrano.1 you can see (from L to R) Kamala, Lechmee, Meena and the African Tikka. She came from the British Circus Hoffmann. She died last year. On the other Medrano pictures you can see Rita Labahn assisted by Ahmed Loyal. //Vince 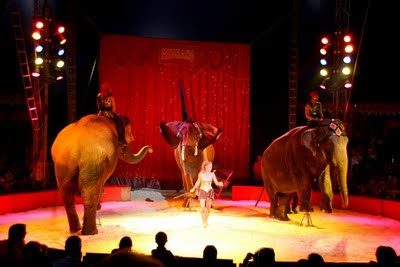 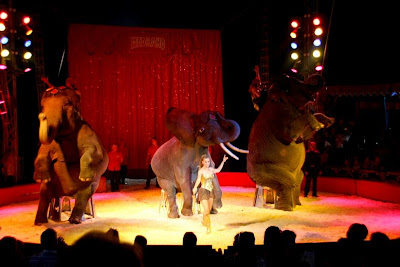 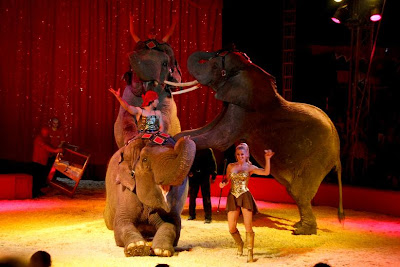 Cirque Medrano, 2008
Courtesy of V Manero
Elephant.se lists Kamala, Lechmee and Meena as 45 year old female Asian elephants, acquired by Circus Chipperfield in the early 1970s. There is a citation on Lechmee's page that she is blind and cannot work in the ring. Some sort of operation occurred in Germany, conducted by ophthalmologists and veterinarians. She is the animal excluded in the act pictures shared by Mr. Manero.

Tikka was previously listed as still living, born in 1980. Her death has been updated.

The three Chipperfield elephants were leased to Ringling Brothers and Barnum & Bailey Circus in the United States for several years on the Blue Unit in the mid 1990s. Buckles Woodcock describes the arrangement:

Ben had our elephants with Big Apple while Barbara and I were at home when the Ringling train wreck and Ted's unfortunate death precluded my return to the show.
There were 23 elephants, the most ever carried while indoors but it was a clumsy arrangement. Jimmy Silverlake was in charge of "King Tusk", Graham Chipperfield was there with his three elephants, Patty Zerbini had her elephant "Luke" as well as presenting the two mother cows and their calves "Romeo" and "Juliet" that she and Ted had brought on the show. I handled the remaining fourteen.
A large stock pen was erected in the elephant tent so the punks could roam and nurse at their leisure and all four were transported back and forth from the train in a large wagon. //Buckles Woodcock

"EYE SURGERY FOR CIRCUS ELEPHANT - A female elephant in her early forties has regained her eyesight after undergoing cataract surgery at the Raoul Gibault Medrano Circus in Lyon. Three-ton Lechmee had become blind and was unable to appear in the ring with her companions. Dr. Christine Lendl travelled from Germany to supervise the operation which was carried out by two of Europe's leading opthalmologists assisted by veterinarians. After two injections of anaesthetic the huge patient sank onto her hindquarters enabling circus staff to place airbags round her body before she rolled over onto her side. Because of its huge body weight it is dangerous for an elephant to remain lying down for longer than two hours so only Lechmee's right eye was operated on. Her left eye will be attended to later. The three Asian elephants were originally owned by the now defunct Chipperfield's Circus in Britain. The Medrano Circus also owns Tikka, an African elephant that it bought from Circus Hoffman."

Wade Burck's Circus No-Spin Zone offers more pictures of this act, along with commentary regarding the elephants' origins.

"The two Indian elephants are ex-chipperfield elephants. Originally it were three elephants: Meena, Letchmee and Kamala. They were on Ringling 1994 - 1999 with Graham Thomas Chipperfield and later went to Medrano with Lee Anthony and in 2008 Rita Labahn took over the elephants and she added her African elephant to the show. Medrano also had two Africans for some years. Daniel Suskow presented those from 1998 - 1999. And later Lee Anthony also presented them. Lee Anthony is now presenting the elephants of Circo Mundial in Spain." //Circuslover / Thomas Bonner

"hi correct the elephants on Medrano use to belong to Chipperfields. The African elepphants on this show use to belong to Circus Hoffman in England . Not sure how many of the African remain but im pretty sure the one in the act probably originates from the Hoffman troupe." //Anonymous

More information is sought regarding the history of these animals and the dates for their transfers. Mr. Manero's graciously shared information and photographs were in response to an article at ShowMe Elephants discussing the beginnings of the Chipperfield elephant herd, encompassing 29 elephants imported from Sri Lanka in the late 1940s.