Elephants of the United Kingdom

According to the Elephant.se, the largest online database of elephants in the world, the United Kingdom is home to 71 elephants, 15 of which are males. One individual travels with a circus, while another is a sacred temple elephant. The remaining animals are housed in zoos and safari parks across the country.

There are currently four breeding herds in the United Kingdom. Knowsley Safari Park and Howletts Wild Animal Park enjoy success with mating African elephants, while the Whipsnade Wild Animal Park and Chester Zoo both celebrate births of Asian elephants. The Colchester Zoo made history in 2002 with the first elephant birth via Artificial Insemination in the United Kingdom. There are no bachelor herds of male elephants in the country.

The 'Compilation of Links' page at ShowMe Elephants is updated almost daily at the present time. To the best of knowledge available, an entire listing of elephant pages for United Kingdom holding institutions has been collected and is available for viewing. 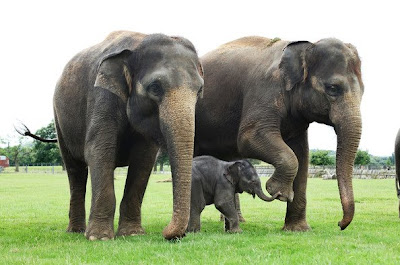 A newborn Asian elephant stands with other members of its herd at Whipsnade Wild Animal Park on July 28, 2009 in Whipsnade, England.
Photo by Dan Kitwood/Getty Images Europe
Posted Friday, March 11, 2011