Six Flags Wild Safari and Great Adventure in Jackson, New Jersey, celebrated their first and only elephant birth in November 1981. The calf was sired by Rip, the last of six imported males still residing at the park. Her mother was Tanya, one of four female African elephants purchased from Hemmingford Parc Safari in Canada to join a number of other females imported with the six males from the Chipperfield organization in Uganda, Africa.

When the calf was two years old, Kenna was sold to the Lion Country Safari location in Grand Prairie, Texas, a location known for distributing and dealing a high number of African elephants throughout the 1980s. It was here that Kenna's identity was temporarily lost, renamed Ruth when purchased by elephant owner, operator and consultant Don Meyer of Jo-Don Farms.

Ruth and other elephants of both species were leased as ride elephants to many different locations while owned by Jo-Don Farms. In late October 1998, Meyer sold his last two elephants, Ruth and Luella, to Brownsville's Gladys Porter Zoo in Texas. Luella died 12 years later relating to a cardiovascular viral infection, leaving the zoo with only two elephants - Ruth and their formerly successful breeding bull, Macho. After Macho's death in March 2005, the Brownsville zoo was left with a decision to acquire more elephants and expand their facility in compliance with recommendations from the Association of Zoos and Aquariums or relocate their single elephant and close their exhibit permanently.

Less than two years later, Ruth was transferred to the Milwaukee County Zoo in Wisconsin, becoming a companion animal for the northern zoo's single elephant Brittany. Three months prior, 49 year old Lucy had passed away, leaving Milwaukee in the same dilemma as the Gladys Porter Zoo. With the acquisition of Ruth, the Milwaukee County Zoo continued their elephant exhibit, while that of the Gladys Porter Zoo was permanently closed. 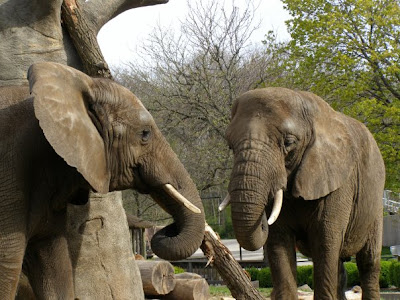 In the 2008 edition of the studbook, elephant #168 has the following information listed:

The question arises, were these elephants two different individuals? Were they merged because of a previous error? If they are the same elephant, what is the reasoning for the omissions between Grand Prairie and Brownsville (except Oak Creek) in the 2008 edition? Any help and insight would be greatly appreciated. Please disregard the elephant database in this matter, as it has been updated from both scenarios and is incorrect at this point in time. Ryan

From 1985 to 1998 Ruth was owned by the same company, Jo-Don Farms. She was a ride elephant that went to all those locations temporarily. In Brownsville, DNA testing was done on her which indicated that she was in fact Kenna. I was told they believe the mistake occurred while she was owned by Grand Prairie? They were an animal broker. Luella went to Brownsville with Ruth, who is now dead. As far as I know, Ruth is the only former JD elephant thats actually still alive.