In March 1967, the Henry Doorly Zoo in Omaha, Nebraska, purchased two three year old male African elephants from the International Animal Exchange in Michigan. Amos was returned to the dealer in June 1972; his final story is unknown. 22 year old Paj died at the zoo in May 1986.

The North American Regional Studbook lists Amos as Lost-to-Follow up, or a "documented animal whose current location is unknown."

>> Elephants of the Henry Doorly Zoo at ZooChat 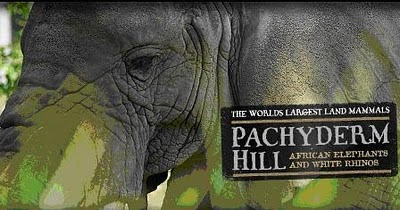 The Henry Doorly Zoo relocated their last elephant in March 2011, closing their elephant exhibit and granting the area to white rhinos.
Photo Courtesy of Squidoo.com
Update: 06/25/2015
Further information has surfaced regarding the disposition of Amos. According to his book "You're the Elephant Man," Frank Kinsey Evans picked up two lions and an African male elephant named Amos from the Omaha zoo. The three ton animal was transported in a modified plywood & steel rhino crate on a trailer pulled by pickup. He lost track of what became of Amos after 1976. Upon arrival to Lion Country Safari in Stockbridge, Georgia, the herd of animals was brought to 7 - one young male and four young female African elephants were new imports, in addition to Amos and another female Moja. Another former employee John Newburn remembers Amos from his time in Georgia. Newburn described him as a mild tempered male who spent most of the days following the park ranger around. Amos is still lost to follow-up after 1976.
Posted Tuesday, March 15, 2011