The Tama Zoological Park, located in the suburbs of Tokyo, Japan, is one of several zoos in the island country to exhibit elephants of both species. The facility also exhibited Japan's oldest African elephant until her death last month at the age of 49. 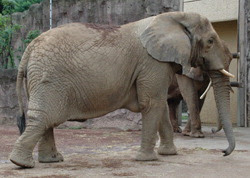 "African elephant "Mako" from Tanzania walks at the Tama Zoological Park in Hino, Tokyo, in July 2008. (Mainichi)"
Courtesy of mdn.mainichi.jp


The Tama Zoo, one of three located in Japan's capital, was previously listed at Elephant.se with a single Asian bull and a single African cow. Their website states the possess elephants of both species and a downloadable PDF map displays the species are kept in separate exhibits in their respective regional zones of the zoo.

Asian elephants
Jonas Livet's AsianElephant.net confirms the existence of the 58 year old Asian bull Anura with both text and photographs. He arrived at Tama from another Tokyo zoo in the late 1950s. No further information is found regarding Asian elephants of the Tama Zoo. 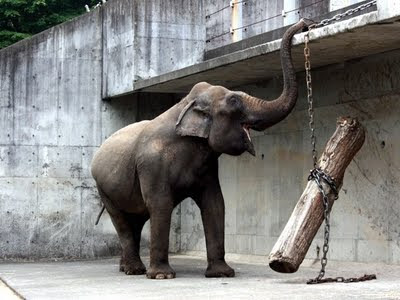 African elephants
Five African elephants are listed in the history of the Tama Zoo at Elephant.se, though errors seem to be present. The recently deceased Mako was not listed as a resident of the zoo, only the single female African elephant Ai. Two deceased males previously resided at the zoo - former breeding bull Tamao and his son Pao. Tamao's daughter Mao was relocated to another facility.

The news article declaring Mako's death states she arrived in Tokyo from Tanzania in 1967. She was accompanied by Ako from Kenya. Both were estimated to be born in 1965.

No mention is made of the breeding bull Tamao. The only information listed at Elephant.se includes his death on 08/08/2006.

The two captive born elephants at Tamao, a male and a female, were born in April 1998 and June 2002, respectively. The male Pao died in July 2007 of unknown reasons. The female Mao was relocated to the Morioka Zoological Park at an unknown date. Both are listed as born to Tamao and Ai, though the mother may be incorrect due to the omission of Mako from Elephant.se records. 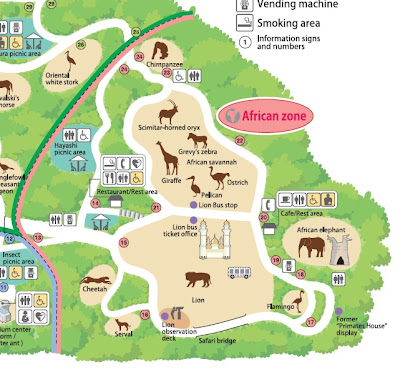 African Zone. Tama Zoological Park.
Courtesy of Tokyo-Zoo.net
/
All Elephant.se records for the African elephants of the Tama Zoological Park list Peter Stolk as a reference for information. This thorough elephant researcher has provided the database with an invaluable amount of information, updates and corrections.

More information is sought regarding the elephant history of this Japanese institution, including verification of the captive births parentage.