Bill Reynolds graciously shares a photograph from his collection featuring a portion of the Carson and Barnes herd of Asian elephants in 1981.

The vintage news article discusses Lilly and Isa. It states the two Indian elephants are "only 16 months in captivity." The following question was posted to Mr. Burck and he replied in kind:

Ryan E said...
Article states April 1974 as an arrival date of these two. Was that the largest and last import group by DR?

Wade B said...
Radar,
When I went to pick up baby Obert, Kelly, and Tracy 3 months prior to this to present in Denver for Clyde Bros Circus, there were 51 elephants on the show. Two adult Asians, one young African named Paula, and 48 young Asians ranging in ages from 3 to 6 all with their names stenciled on their foreheads in 3 inch white letters. The headpieces were 3 inch round washers, each one held together with a link from a cut chain. The elephant tubs were catch traps for street manholes.
Wade

51 elephants! Very few of them are documented. Only 14 elephants of the current 27 member Carson & Barnes herd stem from the 1975 juvenile group. 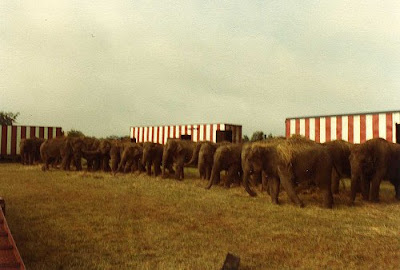 "I wanna say early 70s Paula and Ruby and them came later.."
Courtesy of A Jewell
Posted Thursday, December 08, 2011