This news article dated April 3, 1980, documents the injuries sustained by female Asian elephants Connie and Nellie in a hay fire caused by a welding accident.

Very little information can be found regarding these two elephants. Other than their names, the only details regarding these animals' history is their ages - Nellie was 28 and Connie two years older.

Elephant historian Bob Cline lists both these elephants in his extensive records. Both are listed with Carson and Barnes Circus from 1977 to 1980.

Neither elephant was listed in the North American Regional Studbook for the Asian Elephant prior to 2010. The 2010 Edition adds Connie in its updated version. Number 713 was born about 1958 and imported by the Miami Rare Bird Farm at an unknown date. The Memphis Zoo purchased Connie in June 1961. She was sold 14 years later to Carson and Barnes Circus in October 1975. Around 1980, the Studbook states she was sold to Mexico and died the same year. Nellie is still not listed in the 2010 Update. 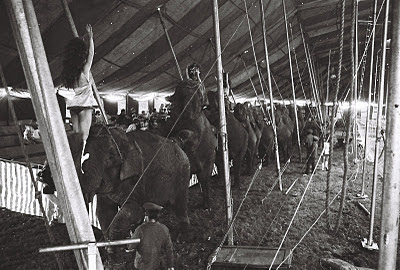 Long mount, Carson & Barnes Circus, 1978
More information is sought regarding both these animals.

>> "Connie at Unknown" at Elephant.se