Dick Chipperfield states in his 1963 book "My Friends The Animals" that, at age 24, his first elephant was not a good circus elephant. She was subsequently sold to the Chessington Zoo. 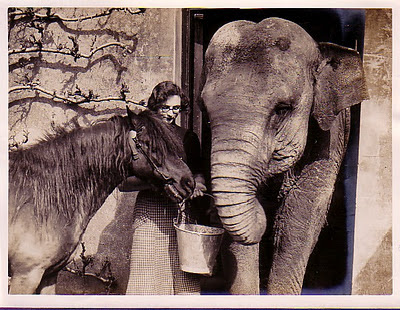 "Taken on March 29th, 1935. The caption reads: Good morning, Mrs. Elephant. Rajah, the poney, likes to accompany the assistants at feeding time at the Chessington, Surrey, Zoo. Here they are calling on \'Rosie\' the elephant, who seems to be giving them a good welcome."
Courtesy of Meaghan Edwards, ZooChat.com

Neither Elephant.se, AsianElephant.net nor the European Association of Zoos and Aquaria Asian Elephant Studbook have record of this animal.

We were so successful with them that the following year we were able to buy a little elephant which, incidentally, became so friendly with our original black stallion that eventually they were inseparable. //Dick Chipperfield

A circa 1935 zoo poster featuring Rosie the elephant:
>> "Posters," ChessingtonZoo.info

No specific dates can be found of Rosie's acquisition by the Chipperfields nor for her sale to the Chessington Zoo in Surrey. What became of her (death or transfer) is also unknown. Her record has been added to Elephant.se with a confirmed existence at both of these locations.

>> "Rosie at Chessington World of Adventures (Chessington Zoo)" at Elephant.se

The existence of this elephant was raised in a post documenting the large Chipperfield elephant herd import in the late 1940s to the sale of eight elephants to Ringling Brothers and Barnum & Bailey Circus in the early 1960s.

Update 12/06/2011:
Rob Vaughn completes Rosie's story in the comment found below and shares two images as well from postcards. 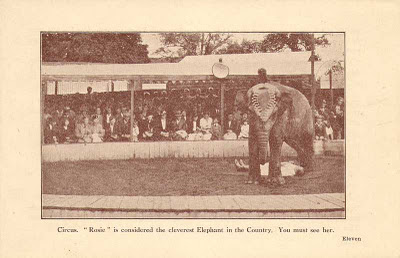 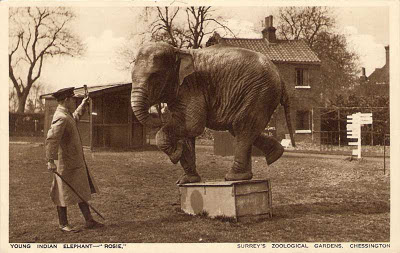