"One of Taronga Zoo's elephants, Pak Boon, which gave birth to a calf three months ago, has been diagnosed with tuberculosis.

The zoo's senior vet, Larry Vogelnest, said the 19-year-old Asian elephant had no symptoms but tested positive in a routine, three-monthly laboratory screen for the bacterial disease, which is relatively common in elephants.

The zoo's seven other elephants have tested negative. Pak Boon is on drugs to kill the bacteria.

Dr Vogelnest said it was likely she had been infected in Thailand before coming to Australia four years ago, and the disease had remained dormant and undetectable. 'Now it has reactivated, and I think in her case it was almost certainly because of the birth of her calf.'"

For the full article:
>> "Zoo says no risk to visitors after elephant diagnosed with tuberculosis," The Syndey Morning Herald, 02/05/2011 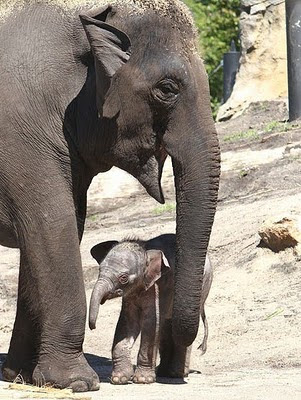 "ABQ BioPark Elephant to be Treated for Tuberculosis," GardenNews.biz
February 10, 2011

"The veterinary staff at the ABQ BioPark Zoo is actively monitoring an illness of one the zoo’s elephants.

Head Veterinarian Dr. Ralph Zimmerman has confirmed the presence of tuberculosis in Alice, a 37-year-old elephant. Tuberculosis is not uncommon in captive pachyderms and can be successfully treated. Dr. Zimmerman consulted with the nation’s primary researchers studying tuberculosis in elephants and with U.S. Department of Agriculture officials to determine the most appropriate course of treatment for Alice.

Throughout the prescribed year-long treatment, the zoo’s animal care staff will monitor Alice’s progress through trunk washes and serum analysis. The staff will also monitor her liver function, blood levels and appetite to assess side effects of the medications. Alice will remain with the rest of the herd to minimize stress on her and the other elephants while she undergoes treatment. The other elephants are continuously being tested for TB." 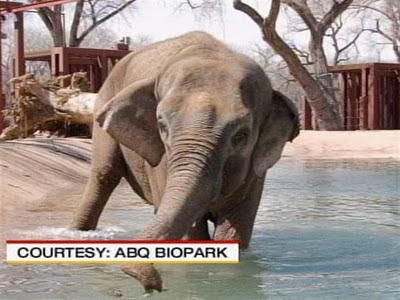 Alice at the Albuquerque Zoo
Photo Courtesy of KOAT.com

"The town of Lyon pains to look after tuberculous elephants"
February 15, 2011

"Two elephants lent to the Lyons zoo of the Gold Head are from now on carrying tuberculosis. The welfare men of the zoo refuse to approach them. The circus owner of the pachyderms however awaits animalist park that it treats these elephants.

Misfortunes become legion among boarders of the zoo of the park of the Gold Head in Lyon. After the drowning of a lioness and the flight of four monkeys, here that two of its three elephants, Baby and Nepal, were detected like carriers of tuberculosis. The diagnosis ran since last year. And to prevent that a contagion is propagated, the pachyderms were far away from the public. But it is also a question of preventing that the disease does not gain the third elephant, Java. The personnel of the animalist park would wish that the two carriers of the germ of tuberculosis, which belong to the Pinder circus, leave the zoo as fast as possible.

David Gomis, the director of the Gold Head, recognizes that "the disease did not develop clinically. The elephants do not spit and do not cough". By measure of precaution it however made condemn the alleys pedestrians which lead to the enclosure. The final distance of the tuberculous elephants, according to him, is justified by the fact that "their treatment would ask for a quasi-hospital device and tons of antibiotics". In fact, two choices are essential on the eyes of David Gomis: "These elephants were entrusted to us by the Pinder circus. They must include them in their spaces of the Seine-et-Marne. If not we will have to proceed to their euthanasia".

This ultimatum had the gift to aggravate Gibet Eldestein, chairman of the circus in question. In a mail addressed to the assistant of the mayor of Lyon Gilles Buna on February 11 last, this last announced that he refuses any final solution concerning his protected suffering, Baby and Nepal. For the number one of the Pinder circuses, it returns to the Lyons zoo to look after the two tuberculous elephants or to pour 150.000 euros per elephant to him. Its missive does not let plane any doubt: "W delivered to them the pachyderms in good health." 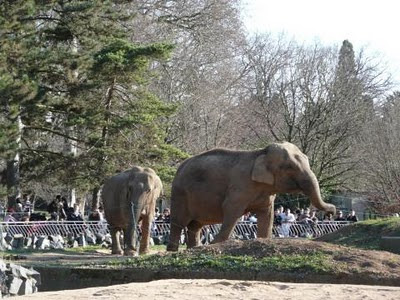 Baby and Nepal at the Lyon Zoo in France
Photo Courtesy of CareVox.fr

"A tuberculosis outbreak among workers at a Tennessee elephant sanctuary in 2009 is being blamed on one of the pachyderms, even though some of the employees didn't have close contact with the animal.

One elephant in the barn — a female Asian elephant named Liz — had been diagnosed with tuberculosis. Investigators believe the TB bacteria spread through the air when the elephant sneezed, or through pressure washing or dust from sweeping the barn of the elephant's waste.

The eight employees tested positive on a skin test and received treatment, but are not sick or hazardous to others, sanctuary officials said in a statement Wednesday.

Liz the elephant received treatment and is still alive, said Dr. William Schaffner, the sanctuary's president. According to the refuge's website, Liz was a circus elephant for many years, has been at the sanctuary since 2006 and is about 54 years old." 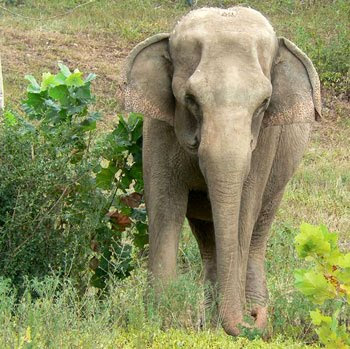 Liz at The Elephant Sanctuary
Photo Courtesy of Elephants.com