The large animal trade company Firma Ruhe was founded in Germany by Ludwig (Louie) Ruhe in 1880. After a large increase in business following Carl Hagenbeck's construction of a new zoo, Ruhe would go on to expand with three generations of his family operating animal trading posts worldwide. Offices in London and the Ruhe Animal Farm in New York helped to supply hundreds of elephants to zoos and circuses in Europe and America.

This location is listed in the North American Regional Studbook for the Asian Elephant simply as 'L RUHE.' The address is described in Alfeld/leine, Germany. There is no differentiation between the three offices of Ruhe, possibly leading to confusion and inaccuracies regarding elephant locations.

Mary and Mona
There are several lapses of information in the North American Regional Studbook regarding Mary and Mona, but it is apparent the pair of female Asian elephants resided together from birth in the early 1940s until their deaths in 1975.

Born in Sri Lanka between 1941-1942, Mary and Mona arrived together to the Detroit Zoo in July 1947. They resided at the zoo in Michigan for an unknown period of time before the Studbook states they were transferred to the animal trade company Firma Ruhe in Germany. However, the company operated two local offices, one in London and a second in New York, where the animals may have been transported as opposed to overseas.

In October 1974, 27 years after arriving in Detroit, the pair of elephants arrived again at a location in Michigan - King Animaland Park in Richmond. This park, operated by circus owner Walt King, covered 40 acres and held animals and amusements in springtime that King leased out to shows for the fall and winter. The Studbook states Mary and Mona resided at the park located north of Detroit until their deaths the following year, approximately seven months later. 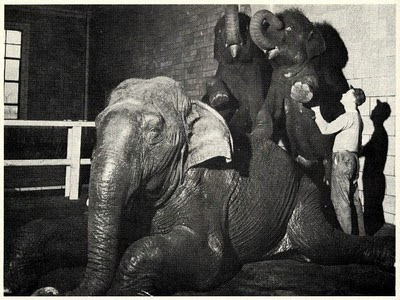 Mary and Mona at the Detroit Zoo - Zoo Guide 1940s
Photo Courtesy of AsianElephant.net
Penny
A female Asian elephant born in Burma in 1938, Penny was imported to the Fort Worth Zoo in August 1940. For an unknown period of time, the animal resided at the zoo in Texas until the North American Regional Studbook for the Asian Elephant states she was transferred to Firma Ruhe. The documentation never gives an arrival back to Fort Worth, but lists the 23 year old elephant’s death at her premier institution in August 1961.

According to a news article published in 2009 commemorating the Fort Worth Zoo’s 100 year anniversary, Penny was purchased as a second elephant through money collected as donations from zoo visitors.

>> "The Animals and Their Trainers," Geostan.ca

>> "Elephants of the Detroit Zoo" at ZooChat

>> "Elephants of the Fort Worth Zoo" at ZooChat