"This poster from the Ringling-Barnum "Romeo & Juliette" tour seems appropriate today. This one-sheet was used for performances at Cincinnati's Riverfront Coliseum during the spring of 1995." 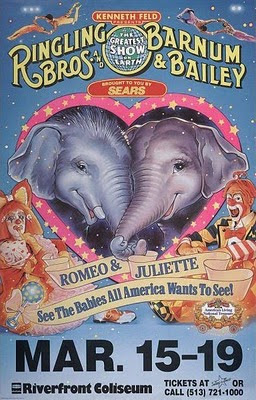 Romeo and Juliette
Photo Courtesy of Chris Berry
The Births
Ringling Brothers and Barnum & Bailey Circus celebrated the birth of two Asian elephants within less than a two week period in the winter of 1992-1993. Juliette, named after Ringling owner Kenneth Feld's daughter, was born at Ringling's elephant breeding compound in Williston, Florida, on December 30, 1992. Eleven days later, Romeo was born, a namesake of the Shakespearean couple.

The Tour
The 1994-1995 seasons of the Ringling Blue Unit featured the one year old calves, originally presented by Ted Svertesky and Patricia Zerbini. In early January, however, the Ringling Brothers Circus suffered their most serious train accident in over 100 years after a derailment in Lakeland, Florida. Both Ted and a clown with the show were killed. Patty would present the calves and their mothers for the remainder of the year, but would not return for the following season.

Current Location
18 year old Romeo now resides at the Ringling Brothers and Barnum & Bailey's Center for Elephant Conservation, the largest elephant breeding facility in North America. He sired his first calf at age nine in 2003 and his second in April 2006. Ricardo and Mable, both born to mother Shirley, were full F2 generation, implying both their parents were born in captivity. 18 year old Juliette is currently touring as one of the nine elephants with Ringling's Blue Unit.