Ms. Hitchcock has graciously shared rare insight into the beginnings of the elephant program of Zoo Miami (or the Crandon Park Zoo, as it was originally known prior to relocation).

Dixie was the zoo's first elephant and about 20 when I knew her. I used to walk her out to the shade area behind the elephant barn and scratch her back with a rake. She had a huge rubber tire she carried around and we called it her 'baby'. Sadly, she developed arthritis in her front foot/leg from all the years walking on the concrete floor of the barn and was operated on. The surgery was a success but she later died of pneumonia. //Candy Hitchcock 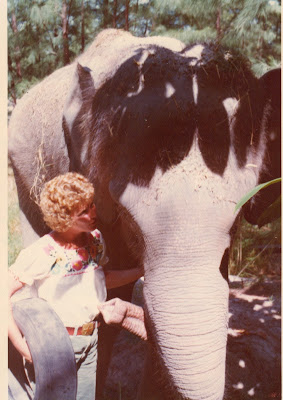 "Hi Ryan, Here is a picture of me with Dixie. I am holding here ‘baby’. Candy"
Courtesy of C Hitchcock
Studbook
Referenced in the North American Regional Studbook for the Asian Elephant as Number 485, Dixie is listed with the following history, without an estimated birth year and an unknown death date.

For those unfamiliar with the studbook location abbreviations, the reference guide states Dixie was imported to Von Brothers Circus around 1956 and transferred later that year to the Smithsonian National Zoo. North Carolina's Tote Em-In Zoo acquired her three years later, but only for the winter. The Deggeller Amusement Company of Indiana took Dixie for an unknown period of time, though it seems she was acquired by a Mr. William Bergstrom of Miami, Florida, for a two year period before arriving at Crandon Park Zoo in the mid-1960s.

The Circus and the Nation's Capitol
A first estimate to Dixie's age and arrival are found in a September 1956 issue of The Billboard with mention of the show's "new baby elephant."

Three months later, another Billboard article discusses the donation of Dixie to the National Zoo. 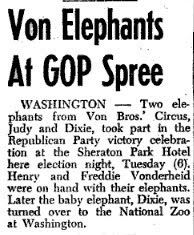 Red Gallagher was named in a December 1956 article as the elephant man for Von Brothers circus. Animal trainer Mike Rice, who joined the show in the 1960s, shared the show wintered at the Red Rock Game Farm in Pennsylvania.

According to Jonas Livet's AsianElephant.net, Dixie's arrival to the National Zoo brought the institution's herd of Asian elephants to three, joining male Ashok and female Shanti. After a three year period, Dixie was again transferred, leaving for North Carolina's Tote-Em-In Zoo. In Wilmington, the young Asian elephant only spent the winter before acquired by an amusement company.

Indiana
The Deggeller Brothers, Irvin and Allen, acquired two elephants in their fourth year of operating their own show. The studbook states Dixie arrived in March 1960, though this may be an estimated date and confirmation is sought. The identity of the second elephant is unknown. Joe Frisco and assistant (and chimpanzee presenter) Jim Cox were "retained" to present the two young elephants. The show wintered in Florida, making the connection to her later sale to William C. Bergstrom, Dixie's next owner.

Florida
Seven and half year old, 3590 pound Dixie was purchased as a pet by William Bergstrom, president of Air Carrier Engine Service, in August 1962. She was delivered and continued to be cared for by two attendants of her former owner Deggeller. Charles Werner and her "negro handler" Henry Benks performed with Dixie "18 tricks" for charitable causes and underprivileged kids. The Miami News article discussing Mr. Bergstom's "new pet" gives a more accurate date to update Dixie's record in the North American Regional Studbook for the Asian Elephant. 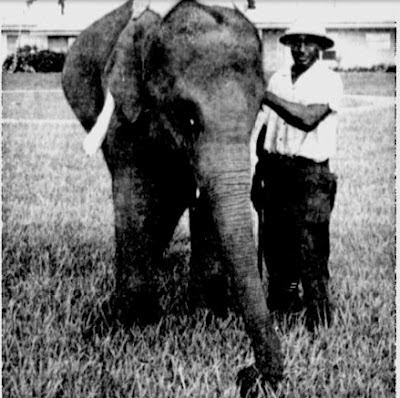 A more detailed description of Mr. Bergstrom and his relationship with the Miami zoo is shared by Erik Olufson and M Cooley at the photo-sharing site PBase.com.

William Bergstrom was the owner of Dixie. He was the founder of ACES, Air Carrier Engine Service which is now Aerothrust , corp.. My father worked there from 1955 til his death in 1993. He knew Mr. Bergstrom very well. As a child I remember going to the zoo just to see Dixie play with that tire. As my father told me, Dixie was always friendly and happy around Mr. Bergstrom. That changed after Mr. Berstroms death. Apparently, when Mr. Berstrom passed on in the late 60's, Dixie became unmanagable for the family which in turn donated Dixie to Crandon Park. Til my fathers death in 1993, every year on Christmas eve he would place flowers on his my uncles tombstone, my little cousin, both his mother and fathers final resting place, and finally he would stop and place some flowers on Mr. Berstroms gravesite. He had lots of respect for that man. //Erik Olufson, 09-Apr-2009 21:42

I lived on the street, SW 104 Ct, that dead-ended (at the time, not a thru street) in to the property owned by Bergstrom, where he and Dixie lived. My dad knew Dixie's commands and what she liked for a reward (cigarettes). I think he spent some time with her, I was born in '64 and Dixie moved in '67 so my memory is sketchy. I think she put on some shows for the neighbors occasionally. When she was moved to the zoo we visited her often. At that time, I suppose it was Crandon Park Zoo, you could get rather close to the animals. My dad would call her and she, I assume, remembered him, would stand, bow, sit, and salute for him. When she was moved to the "habitat" with Pan and Am it was more difficult to get her attention, but that didn't stop my father from trying! I think maybe one time she heard him and responded, this would have been just a year or more before her death. //M Cooley, 29-Dec-2010 15:03

The Crandon Park Zoo originally was located on the island of Key Biscayne, founded in 1948. As stated previously, Dixie was the zoo's first elephant, arriving in the mid-1960s and joined shortly afterwards by a young Asian elephant pair from the Trivandrum Zoo in Kerala, India. In 1980, the zoo was permanently closed and animals relocated to the newly constructed Miami MetroZoo, also in Dade County. The location was renamed Zoo Miami in 2010 for marketing purposes. By this reasoning, Dixie's undated transfer to the Miami MetroZoo as listed in the studbook is incorrect; she was deceased prior to the opening of the Richmond Naval Air Station property for animals.

Dixie's death is discussed extensively in several news articles found online. Her death date is identified as March 16, 1976 as a result from "cardiac arrest...while under sedation" during a second surgery to correct an arthritic right foreleg. Her age is given as 21, making an estimated birth date of 1955. During the first surgery, crushed bone was removed and steel pins inserted, the first operation of its kind. However, unable to place weight on the limb, the pins were dislodged and Dixie's ankle re injured. The second surgery was an attempt to remove the pins and place the leg in a strong cast. 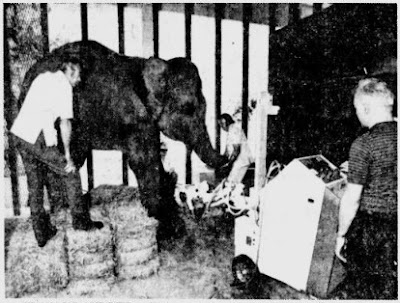