A February 1977 issue of The Circus Report announces the birth of an Israeli elephant, inadvertently creating the topic of a curious mystery for an elephant historian 35 years later.

This animal, by birth and by name, does not appear in many database sources, including Elephant.se, AsianElephant.net and Europe Regional EAZA/EEP Asian Elephant Studbook. The vagueness of the report does not clarify which Israeli zoo celebrated the birth, nor to which species the female elephant belonged.

Israeli Elephant Births
Referencing studbook and database records, it would seem two zoos in this Middle Eastern country began their breeding programs for elephants of both species in the decade discussed - the Tel Aviv Zoo and the Ramat Gan Zoo. According to records, at Tel Aviv, the male African Yossi was born in 1974, followed by another male, an Asian named Alexander, in 1978. Both of these animals still survive and are still breeding, boasting an impressive 37 combined recorded offspring! [Correction: Yossi sired his last calf in 2006 and Alexander in 2009]. According to records, these two animals were the only recorded births for the zoo, which closed down and was translocated to Ramat Gan in 1981. 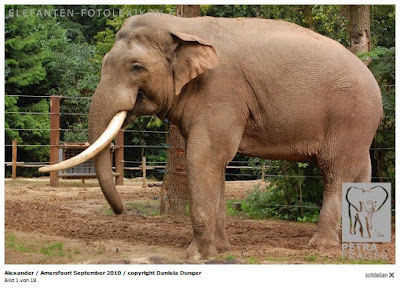 Alexander, Amersfoort Zoo, 09/2010
Courtesy of Elefanten-Fotolexikon.eu
Ramat Gan Zoo has one of the most successful captive elephant breeding programs in the world, breeding elephants with over three dozen births of both the African and Asian species. This record number of offspring, according to records, also began in the 1970s, with two Asian elephants of unknown sex born in 1973 and 1976 to parents Motek and Warda. Very little information is available regarding these animals and if they were not stillborn, neither survived long after birth. Two female Africans were subsequently born - Lara and Sara/Shara in 1977 and 1978, respectively. Both Africans were sired by Timbo to different mothers and later went to live together at facilities in the United Kingdom. 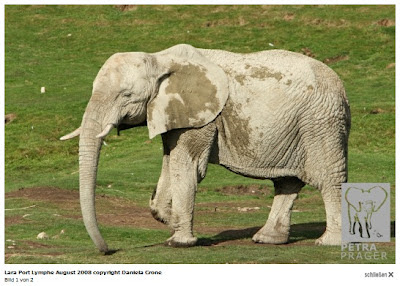 "Hi Ryan, thanks for your friendly words.. !! Shara was at my Archiv. I don´t have a foto about her, so I couldn´t present her at my " FOTO_Lexikon".... Maybe you know somebody who have a pictures of her??
All the Best, Petra."
mail[at]elefanten-fotolexikon.eu
Historical Reference
"Elephant - The Publication of the Elephant Research Foundation" features a fantastic article by Amelia S. Terkel (Curator, Zoological Center, Tel Aviv-Ramat Gan) in its Volume 2, Number 4, January 2000 Edition. Titled "History, Update, and the 'Baby Boom' of Elephants in 1987 at the Zoological Center, Ramat Gan, Israel," pictures and a beginning history of the elephant program are discussed on pages 37 - 47. 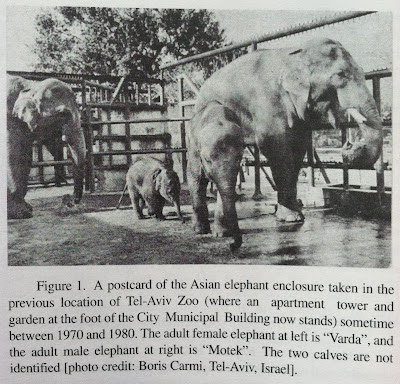 The Asian elephant breeding program did not begin at Ramat Gan, but rather at the old Tel Aviv location. Motek and Warda sired three calves in total at the Tel Aviv Zoo before transferring to Ramat Gan. The first (EEP 7316), born in 1973, was not named, of unknown gender and died shortly after birth. The second (EEP 7608), born in 1976, is of unknown name gender, but actually survived three years before it died of unknown causes. Alexander was the third calf. 43 years after the birth of his first recorded calf, Motek sired his last in 2006, again with Warda, making 17 in total recorded (though not all were with the same cow). He is now 52 years old. 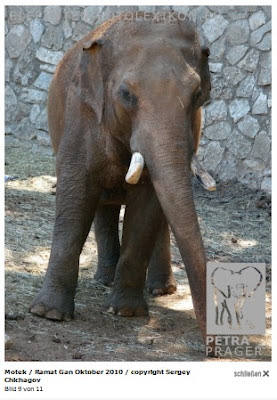 Motek, Ramat Gan Zoo, 10/2010
Courtesy of Elefanten-Fotolexikon.eu
In contrast, the same reference source also discloses that the African elephant breeding program did not begin at Tel Aviv, but rather Ramat Gan. Yossi, Lara and Sara are all listed born at the Zoological Center Ramat Gan. 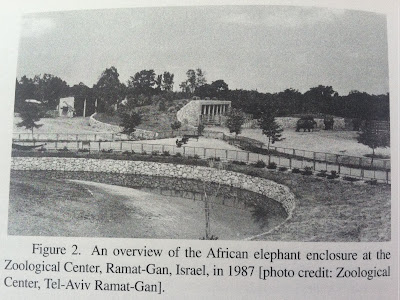 Courtesy of the Elephant Research Foundation
Picture Analysis
It would seem that the Asian elephant family pictured in the Elephant Research Foundation's publication would be Motek and Warda's two offspring, the unnamed three year old and either newly born Alexander or perhaps newly born Amy (if Amy was an Asian elephant, an issue still unresolved).

Juxtaposition
The exact birth dates for any of the Asian Tel Aviv calves are unknown; only years are given. Perhaps with the lack of accurate record keeping at the facility, it is curious to wonder if "Alexander" was not the "Amy" described in the Circus Report article. A mistaken gender identity would not be surprising for a newborn calf forty years ago. If this is the case, an exact birth date for one of Europe's leading breeding elephants has been found (01/20/1977, as opposed to 00/00/1978) and a new elephant has not been identified. If not, a mystery is left without an answer, though not without helpfully bringing to light other record keeping errors and corrections.

African Breeding Program
[Update: 05/02/2012]
It perhaps may be more likely that the calf was an African not recorded. The Tel Aviv/Ramat Gan African elephant program began six years after the arrival of the first Asian elephant. Arusha, Tanzania, provided a source for both the first import of this species in 1964, a male and three females, and a second ingression in July 1973 of six more females. The first group of animals were estimated at three years of age at time of arrival and the second group estimated at four. Given rare records of captive female elephants giving birth to their first offspring as young as four years of age (conceiving as young as two), seven of these nine females pose as candidates as dam of January 1977-born Amy (should she have been an African). Atari and Motek (the African female, not to be confused with the institutions Asian male of the same name) are not candidates, birthing daughters Lara and Sarah in 1977 and 1978, respectively. Both of these females were two of the three imported with breeding male Timbo in the first group. The third female, Bahati, gave birth first, dam to Yossi in 1974. Should the 'Amy' calf have been African, Bahati would be the most likely candidate as her mother with plenty of time passing between births for a 22 month gestation. It also expels the idea that the six imported females under 10 years of age would have birthed the calf. This is all speculation of course, an attempt to solve the mystery of the Circus Report news blip.

Dan Koehl states Ramat Gan was not active with African elephants until 1981, informing that although the facility opened in 1974, they did not display large tropical animals until seven years later. This is contradictory to Dr. Terkel's article and tables citing the African births at Ramat Gan. Clarification regarding where the African elephant herd was imported and began breeding is sought.

If anyone has further information regarding the animals in question, please leave a comment or message me in an effort to complete their records for elephant historians.
Posted Monday, April 30, 2012