A January 1978 news article published in The Circus Report documents the death of Kimi, a 13 year old female Asian elephant at the Oakland Zoo in California. 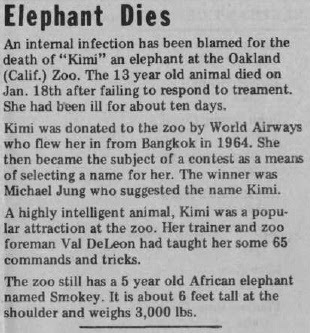 Circus Report, 7th year No 5, Page 9, 01/30/1978
Courtesy of CircusHistory.org
Kimi's exact arrival date to the Oakland Zoo is unknown, though estimated by the North American Regional Studbook for the Asian Elephant as around October 1964.

Udgi
The Oakland Zoo, which currently houses a herd of African elephants, historically held members of both species. Their first African elephant arrived in July 1975 from the animal importer Louie Ruhe. She returned to a Ruhe facility (presumably in New York) approximately a year and a half later (though the studbook only lists a date of departure as 1977). No further information is available for this animal. She is listed in the North American Regional Studbook for the African Elephant with Studbook Number 366, but "Lost to Follow-up," or a "documented animal whose current location is unknown."