A mystery elephant has been discovered in the annals of the Billboard magazine archives, the Tote-Em-In Zoo's successor to Bertha, the Nugget Casino's famed elephant who spent 37 years at the Las Vegas entertainment venue until her death in 1999. 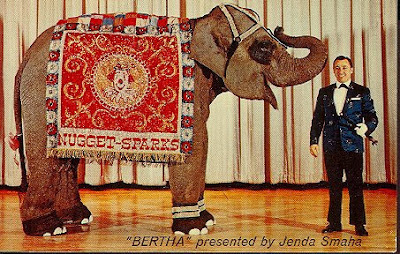 According to the records of the North American Regional Studbook for the Asian Elephant, Berth was imported from Assam, India, in June 1956 and sold to the Adams Brothers Circus around March 1958. A June 1958 article in The Billboard announces the Tote-Em-In Zoo has purchased a baby elephant from importer Fred Zeehandelaar. 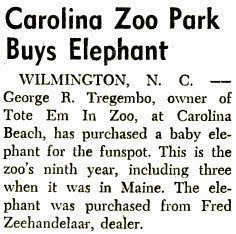 Thus, it would be an assumption this new baby elephant was a replacement for Bertha. However, only three elephants are listed in Studbook records for George Tregembo's Wilmington, North Carolina, zoo.

More information is sought regarding this mystery elephant's identity.