Ryan,
These two photos were were taken at Peoria Shrine Circus, Peoria, Il, 6-96. Corky Plunkett and elephants. Show produced by Plunkett family. James, I believe, later said these elephants were sold to their cousin (?) Bill Swain.

Am looking forward to seeing KM this fall and spending some time visiting with you. I visited on the Litchfield, Il, date in maybe April, but left right after the show due to approaching storm.....and the three hour drive home. Best............Bill Prickett 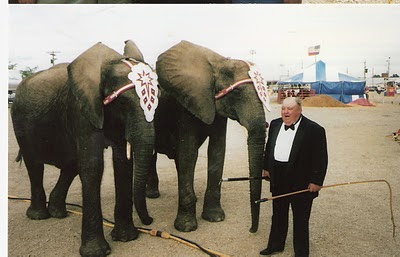 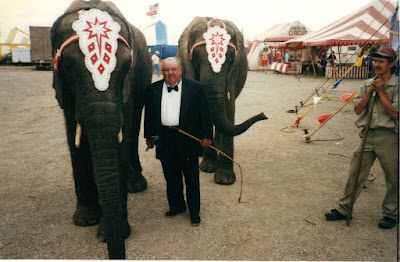 "Corky Plunkett, Peoria Shrine, 6-6-96"
Courtesy of B Prickett
These two female African elephants are June and Jean. According to the North American Regional Studbook for the African Elephant, these two elephants were acquired from Premier Wildlife Ranch around 1988, following their import from Zimbabwe with a possible group of eight in 1987. 14 year old June died in January 1999. In December 1999, Jean was sold to the Swain family where she still resides today.
Posted Monday, June 20, 2011