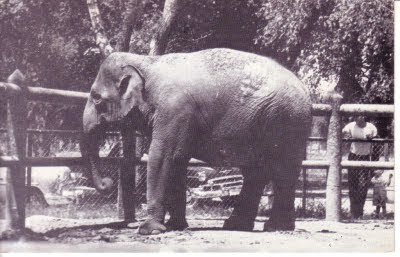 Radar said...
Wade has a knack for posting pictures of elephants whose history falls under that 'Studbook Mysteries' category. The North American Regional Studbook for the Asian Elephant lists two 'Penny' elephants at the zoo in Garden City, Kansas.

The first Penny was acquired in 1948 by the Cheyenne Mountain Zoo in Colorado Springs from animal importer Henry Trefflich (confirmed by a 1952 Billboard elephant census). Two contradicting dates exist for her arrival to Garden City. The Studbook states she was transferred to Kansas in 1953; the zoo's website narrating their history states 1956. Her death is listed in the studbook as June 1956.

The second Penny is listed in the studbook arriving from the Carson & Barnes Circus circa 1970. No further information is given and she is listed as "Lost to Follow-up." This second Penny did not previously exist in the database. I have now added her with records to match the studbook.

My assumption is the elephant pictured in Wade's collection is the Oklahoma circus' Penny. She looks much older than the ten year old animal that reportedly died in 1956.

Wade said...
Radar,
Not a knack, just a pot load that I have acquired over the years, and post when it seems right.

With records recently acquired compiled by elephant historian Ray "Sabu" Moreau, an elephant census published in a May 1969 edition of 'Amusement Business' does not list Penny in Carson and Barnes Circus' 9 member herd of elephants. However, she is listed in an elephant census published in a November 1972 edition of 'Amusement Business.' She is one of a 20 member herd of elephants under trainers John Carroll, Whitey Gross and Kenny Ickert. Thus, Penny arrived to Carson and Barnes between this time period and left to Lee Richardson Zoo after 1972, not 1970 as stated in the studbook. More information regarding this elephant is sought and if the possibility exists she is the elephant pictured in the postcard from Wade Burck.