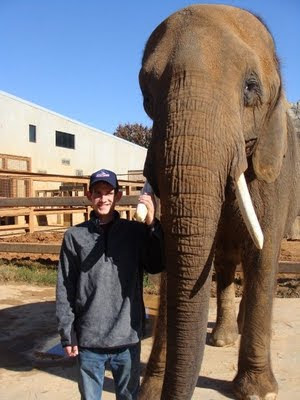 Ryan Easley and 'Jana'
29 year old African female elephant
Knoxville Zoo
Knoxville, Tennessee
November 2009
Rather than adding a new post regarding elephant history or current elephant news, I would like to bring attention to an article posted earlier this week regarding Circus Chipperfield's elephant herd from the late-1940s to mid-1960s. The post has now gathered more than 20 comments and has uncovered a lot of information regarding the 29 elephants originally imported from Sri Lanka. Locations in Russia, Ireland, Borneo and the United States are discussed with input from readers in South Africa, the United Kingdom and the United States. ShowMe Elephants, indeed!