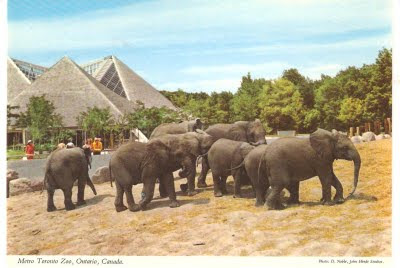 
Radar said...
Wayne Jackson tells us these elephants were imported by Fred Zeehandelaar. They had a rather successful breeding program for the time period in the early 1980s.

An educated guess brings me to believe this photograph was taken in the mid-1970s, within a several year time period after the entire herd had completed arrival in late 1974. The first successful mating occurred in 1978, leading to the birth of Thika in October 1980. None of the elephants in the photograph appear to be heavily pregnant.