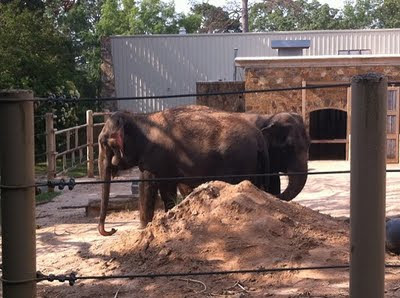 "Zina (front) and Jewel in their new Little Rock home"
Courtesy of ArkTimes.com
The exchange took place as part of Ringling's Single Elephant Companionship Program. The Arkansas zoo first benefited from the program with the donation of Mary, a former Ringling performer acquired in 1968 from Germany with the arrival of Gunther Gebel-Williams. Mary joined the Little Rock Zoo's female Asian elephant Ellen in March 2001, who had previously been kept alone after the death of Ruth in 1977. Last month, the 60 year old female Asian elephant was diagnosed with terminal tumors of the abdominal region. She was subsequently euthanized when her health continued to decline.

A month following the loss of Mary, Ringling once again prevented the zoo from housing a single elephant. 51 year old Zina and 59 year old Jewel were donated from the Ringling Brothers' Center for Elephant Conservation. Both performed with the Ringling Blue Unit until their subsequent retirements in 2003 and 2006, respectively. Jewel (originally named Cutie) was one of 20 elephant calves acquired by Ringling in 1954. Zina was acquired in 1972 with the purchase of the Billy Smart Circus elephants from England.

Zoo director Mike Blakely expressed his sincerest appreciation for the donation saying “The gift of Zina and Jewell to the Little Rock Zoo shows the strong commitment that Ringling Bros. and the Zoo have to elephants and their well-being. Ringling Bros. is a leader in the conservation and care of elephants and understands that elephants are social animals that need companionship. Ringling Bros. also understands the mission of the Zoo to provide engaging educational experiences that influence the public to conserve our natural world.”

The Niabi Zoo in Illinois and El Paso Zoo in Texas have both also benefited from Ringling's Single Elephant Companionship Program.

Ringling Bros. Center for Elephant Conservation founder Kenneth Feld, expressed the significance of the donation saying “The Little Rock Zoo continues to demonstrate the knowledge and expertise that is required by Ringling Bros. and Barnum & Bailey to partner in its Asian elephant companion program. The staff at Ringling Bros. Center for Elephant Conservation trusts that the staff at the Zoo will care for these majestic elephants and provide the much needed conservation education to help save the endangered Asian elephant species.”

Opinion Commentary
How refreshing to hear good news distributed from media outlets! I am glad to hear the zoo was not only able to work quickly to provide companionship for their single elephant but also to build cooperation between the animal industries. This is the second time Little Rock has benefited from Ringling's generous Elephant Companionship Program. They are not the only zoo to benefit from this partnership, either! The citizens of Little Rock will continue to appreciate elephants at their local zoo and Ringling has once again benefited the captive elephant community in the United States, in addition to managing the most successful Asian elephant breeding program in North America for the last 20 years.

Animal Rights organizations and extremist groups will continue to criticize circuses and zoos displaying animals for public enjoyment and education until they no longer exist in these venues. However, the two locations to which they wish American (and even South American and European) elephants be relocated cannot possibly house the numbers that exist nor can they (or as they in the past have displayed are willing to) provide the care necessary for both young and elderly animals alike (sickly and healthy). These groups protest elephants performing in the circus, protest the retirement of these elephants to facilities built and managed by those who profited from them during the animals' career and even protest when the same retired animals are removed from the circus industry and relocated for the benefit of the captive elephant population as a whole. The Little Rock Zoo will now receive criticism for acquiring more elephants, though this move was to counter criticism they received for housing a single elephant. The end result to be desired by extremist groups is to remove all elephants from public display until they all reside in their "sanctuaries" and die off, leaving these animals only to exist in the wild until no more exits there, as well.

Steve Robinson has previously expressed interest in ShowMe Elephants addressing more "meatier" topics regarding captive elephant management and husbandry. This is an opportunity to discuss elephant retirement from show business, zoo's philosophical management and accreditation issues and animal rights hypocritical arguments and standpoints. I hope to gain commentary from both professional members of the animal industries as well as enthusiasts and "outside" viewpoints.