The Franklin Park Zoo received a female Asian elephant from animal collector and movie star Frank Buck in summer 1947. This animal is only found in one compiled census record five years later. No further information regarding this animal is available at the current time. 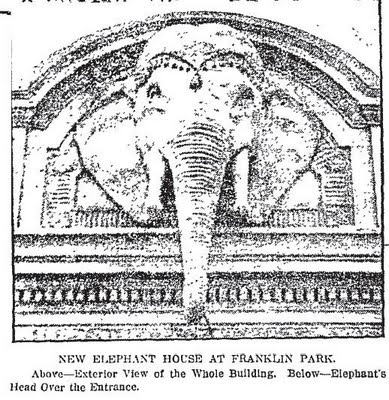 Original Franklin Park Zoo elephant building
Courtesy of Mark B, RememberPlain.blogspot.com
In conjunction with a "Name the Elephant" contest hosted by local periodical The Boston American, Boston's new arrival became known as Beba to residents of the Massachusetts town. Beba's gifting was stated in news articles of the time to be in conjunction with the "screening...of Buck's pic 'Bring 'Em Back Alive.'" However, the original release of the movie dated back to 1932 with Buck playing himself. Further information regarding this scenario is sought.

The addition of Beba to the Franklin Park Zoo soothed the disappointment of Boston residents after a previous agreement with Ringling Brothers and Barnum & Bailey Circus fell through. During the show's visit to Massachusetts, an original offer of a baby elephant "failed to materialize due to a misunderstanding which was straightened out." As compensation, Ringling promised the Franklin Park Zoo the show's first retired elephant. That elephant would be Nellie, acquired by Ringling Brothers in the purchase of the Barnum and Bailey Circus in 1907.

The only follow-up information found regarding Beba is a listing in a published census by The Billboard in 1952. Beba is one of four female Asian elephants listed at the Franklin Park Zoo:

Contradictory Records
The North American Regional Studbook lists this elephant with a Temporary Studbook Number, lacking "supporting documentation to validate their identity." Beba is also listed as "Lost-to-Follow up," or a "documented animal whose current location is unknown." The only information regarding Beba (Studbook Number T2119) listed in the Studbook is her arrival at Franklin Park Zoo in 1974 from the Buck Zoo in Florida. Her estimated birth date is ~1972. These dates are disproved by news articles found in The Billboard dating to the years 1948 and 1952. However, further information regarding her death and/or relocation are sought.