I am trying to find out what happen to a young African Elephant I use to look after. Her name is Linda. she was born in 1969. On inquiring with Twycross zoo where we were. I got reply back as follows. Linda was sold to the Chipperfields in 1974 there is a note on her record to say that this sale wa for onward transmission to Cuba. Dose anyone know what happen to her. Thanking you Eddy Powell

The only animal found at Elephant.se as a possible match to the female African in question is the Heidelberg Zoo's "Malinda" (also listed with an alternate name "Susie.") Listed as born in 1971, she arrived to the German facility in 1982. Her death is listed five years later with cause "cholangiolithiasis and herpes virus?" 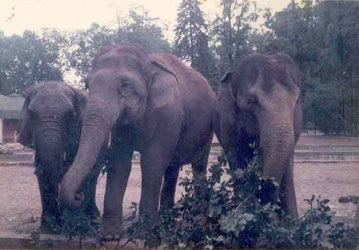 "Malinda is the small elephant to the left in the picture"
Courtesy of Elephant.se

Only one location in Cuba is documented at Elephant.se to have previously housed an elephant, the Santos Argos Circus with female Asian "Wallace Babe" for a six year period between 1916-1922. This is incorrect, as the Zoológico Nacional de Cuba, which opened to the public in March 1984, exhibits a herd of African elephants in a drive-through setting.

More information is sought regarding the elephant population and history of Cuba - an interesting quandary that few records seem to be available, though not surprising given the communist country's restrictive government.

There is always the possibility the elephant Ms. Powell is searching for has not yet been listed in the records of the largest elephant database online, a living document and continuous effort. More information is sought to help her find this animal.
Posted Monday, May 21, 2012