The Tulsa Zoo presents a display in their elephant building for news articles, stemming many decades, relating to their elephant program. Through referencing these articles and conversations with elephant personnel, the following information was discovered regarding George, a young male Asian elephant belonging to the institution.

Don Meyer originally purchased the five year old male elephant from Morgan Berry for The Ranch. The Ranch, located in Menomonee Falls, Wisconsin, was originally a facility for the mentally handicapped. Meyer was responsible for forming a zoo through the organization before founding his own entity, Jo-Don Farms.

The animal's namesake was George Spiedel, director of the Milwaukee Zoo with whom Meyer had worked with as elephant consultant to the institution. The Tulsa Zoo later acquired George by trading to the Ranch Zoo three recently born tiger cubs; the Ranch Zoo planned to sell the animals for fund raising. Don Meyer was attempting to build an elephant breeding program at the Tulsa Zoo with the acquisition of their first male elephant.

At nine and a half years old, George was found dead. A necropsy found internal bleeding near his heart; his body was buried. He had previously mated with Tooma but no pregnancy occurred. 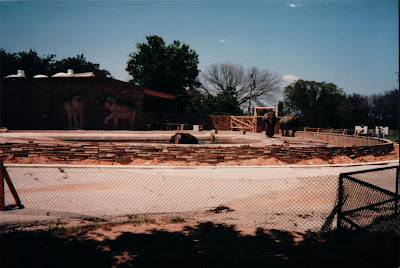