From Lion Country Safari
Gypsy, Muddog and Lady were imported together from South Africa by Lion Country Safari in August 1972. All were near four years old at the time of their arrival in West Palm Beach, Florida. Approximately four years later, the trio was transferred to Kings Dominion. Of the six acquired by the Virginia park in 1976, only these three survived longer than three years proceeding their arrival. All would reside at the park for over a decade until two succumbed to infection associated deaths in the early-1990s. Gypsy died in August 1991 of generalized trauma. Muddog followed her nearly two years later, passing in June 1993 of a urinary bacterial disease. Lady was transferred to another Paramount-owned facility, located in Ohio, in July 1994. 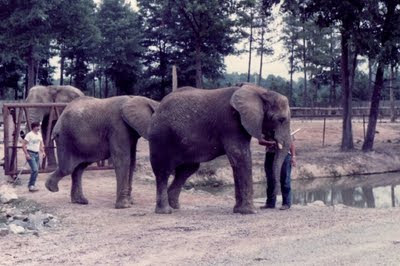 Lady, MudDog & Gypsy, King's Dominion 1983
Photo Courtesy of Bret Bronson
From South Africa
Three young elephants, all between eight to nine years of age, were imported by Kings Dominion in 1976 directly from South Africa. Billie, Ginger and Kidd died within three years of their arrival to Virginia. Billie was euthanized in September 1978 due to musculoskeletal trauma. Ginger and Kidd were relocated to Michigan animal dealer International Animal Exchange seven months later in April 1979. They were subsequently euthanized the following day for unknown reasons.

Asian Elephants
Kings Dominion first housed two Asian elephants, though they were relocated two years after arrival presumably for the purpose of acquiring a herd of African elephants. A three year old male/female pair, Hugo and Ellie were imported from Thailand in March 1974 to Virginia. Ellie arrived via the Lion Country Safari in Stockbridge, Georgia; Hugo’s arrival information is more obscure. They were sold together to the Jacksonville Zoo in February 1976.

Hugo died two years later in September 1978. The animal was presumably named after his predecessor, a 14 year old Asian male the zoo disposed of to the circus several years prior due to his poor temperament. Ellie resided at the zoo in Florida, other than a successful 15 month breeding loan to Syracuse, until she and her captive-born daughter were relocated on breeding loan to the St. Louis Zoo in July 2001.

A third Asian elephant named Bubbles only resided at Kings Dominion for a six month period during the winter of 1981-1982. She had been relocated from her previous home by animal dealer Jurgen Schulz. This animal spent the majority of her life at the Erie Zoological Gardens in Pennsylvania after she was imported in Thailand in 1964. In spring 1982 after Bubbles returned to New York from the Virginia park, she became recorded in the North American Regional Studbook for the Asian Elephant as “Lost to Follow-up."

Park History
A group of South African and British entrepreneurs opened in 1974 a safari park in Florida which they claimed to be the first “cageless zoo." Five more of these “Lion Country Safari" sites would be opened in the following seven years, located near the major US cities of Dallas, Los Angeles, Atlanta, Cincinnati and Richmond.

Kings Dominion first previewed their facility with a Lion Country Safari attraction in 1974, a year prior to the amusement park portion with rollercoaster rides. The animal exhibits attracted visitors for several decades until the park was purchased in 1993 by Paramount; Lion Country Safari subsequently was closed at the end of the season. The last remaining elephant was transferred to the park’s sister location Kings Island, near Cincinnati, Ohio. 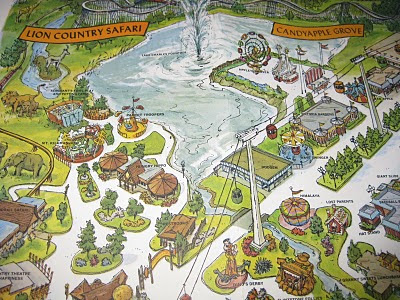 >> "Elephants of Kings Dominion" at ZooChat

>> "Elephants of the Jacksonville Zoo" at ZooChat

>> "Elephants of the St. Louis Zoo" at ZooChat