History
The Detroit Zoological Society was founded in 1911, 28 years after the first zoo in Detroit began based on a bankrupt circus. Their first zoo opened 17 years later in 1928. This institution was located on Belle Isle on the Detroit River. Through several name and purpose changes, it permanently closed in 2004. According to the Detroit Zoo, it was the Motor City's only zoo until 1947, upon which time it was converted to a Children's Zoo and its replacement was built in Royal Oak, a suburb of the largest city in Michigan. During this transition, the majority of the wild animals were moved to the secondary location, though some elephants and giraffes were reported to have remained. It is unknown which elephants resided at which location during the several decade period that both locations kept animals. Other sources state the zoo was transferred in 1956, prompting the transition of Belle Isle to a Children's Zoo.

"Belle Isle was Detroit's first zoo, a menagerie. In the modern era it was an aquarium and children's zoo. I believe it was managed by the Detroit Zoo. Probably had baby elephants at Belle Isle and moved them to the Zoo in Royal Oak as they grew up if they didn't get moved elsewhere sooner." //Jim Alexander

Studbook Entry
The North American Regional Studbook only lists a single elephant residing at Belle Isle, a male named Johnny with a Temporary Studbook Number, Lost to Follow-up and little information provided. All other Detroit-located elephants are listed as the Detroit Zoo with no differentiation made between Royal Oak or Belle Isle. 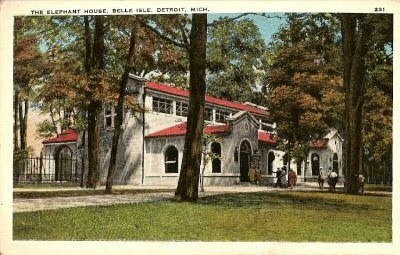 Former elephant house in the 1940s
Photo Courtesy of AsianElephant.net
Mary and Mona
Mary and Mona, two elephants mentioned previously in the Firma Ruhe Studbook Mysteries article, arrived at the Belle Isle Detroit Zoo in July 1947. It is unknown when they were relocated to Ruhe, thus also unknown whether they were in Detroit's ownership during the 1956 zoo relocation.

Mystery Elephant Photo
A mystery photo has been found in the Detroit News collection. It is only titled "Belle Isle Children's Zoo;" the date and elephant's identity are unknown. 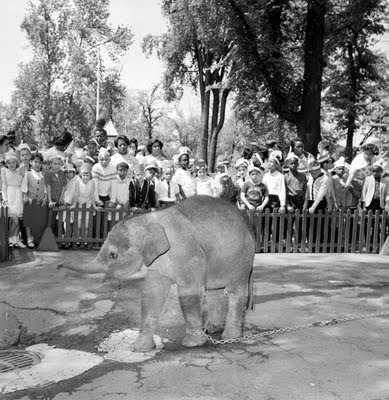