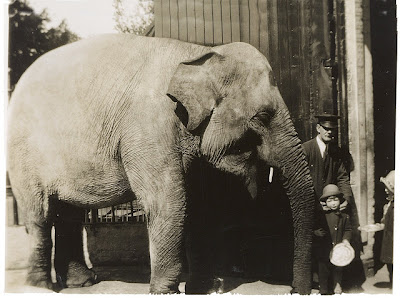 Anne Hutton with elephant at zoo, circa 1925
Photo Courtesy of Robin Hutton, Flickr.com

Inquiry and Response
"G'day Robin, I was wondering if you knew which Zoo this Asian female lived in and what her name was? I am one of several Elephant people around the world that collect info and photos of elephants in captivity. Looking forward to hearing from you! Happy Days." //Wayne The Retired Wanderin Elephant Man

"These were found among a great pile of my mums photos. Nothing written on them but at that age she lived in Dublin." //Robin Hutton

Possible solution
If this picture were taken at the Dublin Zoo in Ireland, the EAZA-EEP Asian Elephant Studbook only lists one possible elephant residing at the zoo during this time frame. Listed without a name, the female arrived in February 1912 from London. No further information is given and she is listed as "Lost to Follow-up."

Jonas Livet's AsianElephant.net states a female elephant named Sandari resided at the zoo alone from 1912 to 1927. In 1927, she was joined by an unnamed elephant that died the same year. A replacement was acquired in 1929, named Dangiri Amma. Sandari died the following year in 1930.

Request for Information
The estimate regarding the EEP studbook's unnamed elephant and Livet's 'Sandari' are solely based on the photograph owner's statement of her mother residing in Dublin at the time.

Any information that could lead to the positive identification of this animal (in addition to further information regarding the lost Dublin elephant) would be greatly appreciated to complete elephant records and to satisfy the inquiries of Peter Dickinson, Wayne Jackson and ShowMe Elephants.
Posted Monday, April 11, 2011