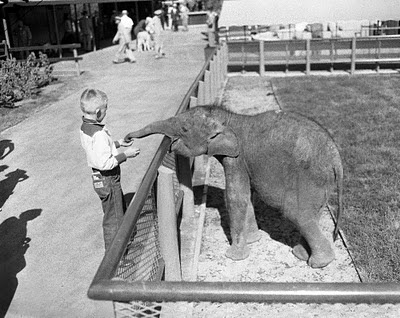 Wednesday, April 6, 2011
Vintage Brookfield Zoo Elephants
The photo above is from 1953, elephant unknown, at the Brookfield Childrens Zoo. It is incredible today to think that they used to keep and raise the young elephants in the Children's Zoo. Does anyone know if they actually kept the elephants at the Childrens Zoo, or did the bring them back and forth from the elephant house each morning and night. The sand/dirt walkway around the pen was most likely a path as the animals probably paced along the fence and it prevented the grass from tearing up, and becoming unsightly.
Posted by Wade G. Burck

Susan said...
Based on records I'm guessing this is Melinda, wild born in 1951 and came to Brookfield from Seabury in 1952. She died in October of '53.
Apparently from spring till fall we would keep young elephants at the Children's Zoo - they would return to the Pachyderm House during the winter months. Over the years we had several calves at the Children's Zoo - Winkie, Mame, Babe/Baby Brookfield, Cora/Noel (who lives at the CEC)... There are probably others but record keeping was practically nonexistent back then.
If you look on eBay there are usually postcards of elephants at the Children's Zoo. To the best of my knowledge we did this up until the '70s.

The elephant 'Melinda' mentioned by Susan was one of five calves acquired from an location known only as 'Seabury.' The North American Regional Studbook for the Asian Elephant gives no further information regarding this person or place. It would be very beneficial for both elephant record keepers and the Brookfield Zoo if this 'Seabury' could be identified with more information.

Regarding the five Seabury elephants, four of the calves are listed as originating from Thailand. Two died at the Brookfield Zoo (one after only two days), two were sold to circuses and the last animal was relocated to another unknown location. This place is listed only has 'Hoist Shopping Center' in the North American Regional Studbook for the Asian Elephant and is another location needing further information.

Numerous other elephants were acquired by the Brookfield Zoo of both species for both the Children's Zoo and the traditional exhibit, though they are all listed arriving from differing elephant dealers, zoos and private owners.

The fourth elephant acquired from Seabury, named Dolly, is perhaps one of three duplicate elephants listed in the studbook. This mystery will be addressed in a later article.