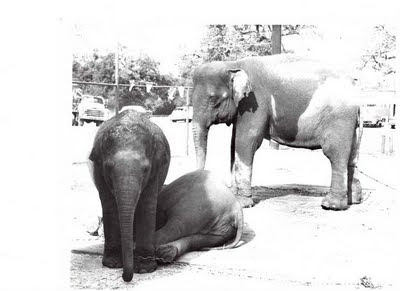 Radar said...
Is this the Bamboo owned by Morgan Berry before she was sold to Seattle in 1968? The studbook states she was born in 1966, so this would be unlikely. What is this animal's story?
Is this the Sheba owned by Wallace Brothers in 1961, later a Cristiani elephant before arriving at the Buffalo Zoo in 1984?

Wade said...
Radar,
A Brookfield Zoo staff member mentioned a week or so ago, that their record keeping was shoddy. On it's best day, in the past, a circus's record keeping would have been appreciated if it had been at least shoddy, as I am sure you have found out by now. A treat would have been somebody recording it on a napkin in the cook house. As it's stand's most of it is word of mouth ...
Bamboo I, Bamboo II, Bamboo III, Little Bamboo, Bamboo Jr. etc. etc., unless it's name was changed to Sparkle on the Hoot Bros. show for a year, before becoming Big Mable on the Toot Bros. show. That's how you develop the "elephant record book twitch." Your guess is as good as anybody's. LOL I don't know if you recall Mary Ann chastising me a couple of years ago on the blog, for being cold and heartless when I suggested the captive animal world had missed the boat by not assigning just a number to all animals from the time of capture birth, and only having a insignificant "barn name" for handling by keepers and trainers. Trainers could change it's name a dozen times over it's life, but it would still be #56932, with a name of no consequence,regardless of it's spelling or accented pronunciation, as is done now for the most part.
Wade

Another possibility for the 'Bamboo II' elephant is an elephant listed in the North American Regional Studbook for the Asian Elephant, 'Bimbo II.' With a Temporary Studbook Number and Lost to Follow-up, she is listed as arriving to Louis Goebel in February 1961, Jungleland in 1962 (a possible redundancy?) and finally to Six Flags Marine World in Vallejo, California, in October 1969.
Posted Saturday, April 23, 2011