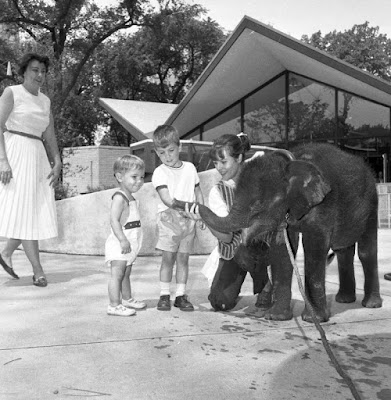 Jim A. said...
I was a volunteer keeper (because I didn't live in Chicago) at the LPZ Children's Zoo in 1960 and 61. Ed Maruska was the senior keeper before he went to Cincinnati (a week after me). We had a male Asian named Mogul and then a female African I think named Elka ( supposed to be one of the Hatari elephants.) Don't know where they ended up. When Mogul was very small he was kept in the CZ building. When both elephants were close to four feet tall they were exhibited on the lawn near the CZ and kept over night at the Small Mammal House. After a few rodeos they were reliable about moving back and forth but that was it for behaviors. My guess is LPZ probably leased babies until they out-grew their welcome. Long ago but my guess is the zoo keeper is Susie Rowan.

Radar said...
Thank you for sharing, Jim.
Elka went to the Phoenix Zoo for a short time before she was transferred to Busch Gardens in Tampa. In the late-1980s, Kings Island near Cincinnati acquired her. She died at the amusement park in 1992. Mogul left Chicago in 1963 to animal dealer Murray Hill. No records indicate where he ended up. Hopefully someone can help with this mystery.

Radar said...
Jim's guess regarding the Lincoln Park Zoo leasing baby elephants seems correct:
- Two year old Mogul was acquired in 1960. He was traded with animal dealer Murray Hill for months old Kate in summer 1963. Kate (the third acquired in 1963) died five years later.
- A two year old calf arrived in April 1963 from Miami Rare Bird and Game Farm, only to stay for three days before going to Joe Friso's zoo in Peoria.
- The Game Farm replaced the animal with Contessa, who was relocated to the International Animal Exchange three years later.
- Three year old Siri Sue stayed for a year between October 1971-1972 before sold to the Syracuse Zoo.
- Year old McClane spent three months in the summer of 1973 before returned to Circus Vargas.
There were also several that stayed into their teenage years or later, including Indu (acquired 05/1966) and Bozie (acquired 11/1976).
This is all based on the North American Regional Studbook for the Asian Elephant. Two of the elephants (Mogul and the Frisco elephant) are "Lost to Follow-up." There is no mention of a "Teena" elephant - I wonder if this could be the April calf that only stayed for several days?

Wade G. Burck said...
Radar,
Good stuff, thank you. You are only about half a putz now because you have become smarter. Good job. Is the McClane you mention McLain that Rex Williams had on Vargas? I don't recall there being a McLain with Wally Ross in 1975, but I may be wrong. Wasn't McLain also the name of Alan Cambells african that went to Pittsburg?
Wade

Radar said...
(According to the Studbook): McClane was born at Portland in July 1972. Sometime the following year, Rex purchased him and (except for his brief stint in Chicago) he remained on Vargas until his death in the mid-1980s. When did he die and what was the cause? Do you have any pictures of him?
I do not know from where Campbell acquired his African male Maclean. He is one of the two bulls I asked you about regarding their location when Allen was employed by Hawthorn. Both were sold to Pittsburgh by after his death. Maclean is now at Disney.

In summary, discussed here are three elephants that are "Lost to Follow-up," without record of where they lived or died after a certain transfer. Also, an extra elephant named "Teena" was mentioned by Wade; she may or may not be one of the three lost elephants. There is no mention of an elephant named Teena in the studbook at the Lincoln Park Zoo.

To update my original comment to Jim Alexander regarding the temporary elephant calves, there are in fact three lost elephants rather than two. With further information that the photo was taken in June 1963, it eliminates the Peoria zoo elephant from the running, leaving only 'Contessa' as a possibility of the elephant pictured. This is unless there were other unlisted elephants located at the Lincoln Park Zoo in the selected timeframe. Five year old Mogul, who left the following month, would have been much larger than the animal pictured. However, Contessa's age is unknown if she would match the size of the elephant pictured; it is assumed she was another leased calf for the Children's Zoo as described by Jim Alexander.

Questions to be answered:
- What became of five year old Mogul after Murray Hill acquired him?
- What became of the two year old calf sent to the Glen Oak Zoo and what was she named?
- What became of Contessa after she was relocated to International Animal Exchange? Was she also known as Teena?
- Was there another elephant at the zoo named Teena that is unlisted?
- Are more specific dates available regarding the purchase/transfer of McClane to and from Rex Williams / Circus Vargas and the elephant's death?