Buckles Woodcock has recently posted several series of photographs of the short-lived LE Barnes Circus, owned and operated by wild animal trainer Dave Hoover for a single season in 2001. There was discussion regarding which elephants were featured in the animal-filled show, presented by Louie DelMoral. Casey Cainan shares the three bulls, Minnie, Bunny and Whimpy, were leased from Carson and Barnes Circus based in Hugo, Oklahoma. 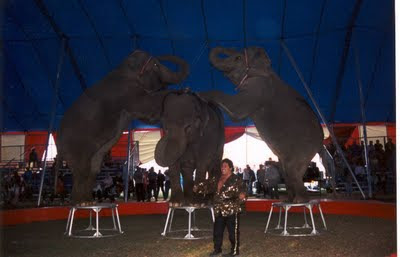 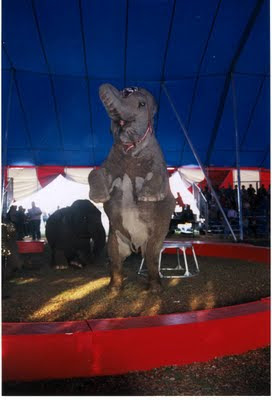 Jimmy Cole shares a history of the show's beginning and tenure in 2001 at Buckles Blog.

10 Years ago... Wild animal trainer Dave Hoover, after 20 years on Clyde Beatty – Cole Bros. Circus with his lion & tiger act (1966 – 1985) , then several more in management, had always dreamed of taking out his own circus. In 2001, Dave formed a partnership with entrepreneur Eugene Calabrese and began putting together what is quite possibly the last of the traditional American big top circuses, the L. E. Barnes Circus. Dave used his wife’s maiden name, Lois Evans Barnes, to formulate the title. The show was framed at a location near Eustis, FL, and was kept so secret that the winter quarters got the nickname of “Area 51”.

The circus was about as traditional as you could get, three rings, a brass band, opened with a cage act, lots of animals, and closed with Brian Miser’s cannon.

The show opened on March 10, 2001 in Eustis, FL, and made it’s way up the east coast, following closely the familiar Beatty –Cole pattern. The first few weeks were quite challenging, but then things began to go smoothly, and by summer, the show was in the familiar New England States. However the tragic events of 9-11 had a severe effect on the show, business was off, and dates were cancelled. The show closed about a week later. 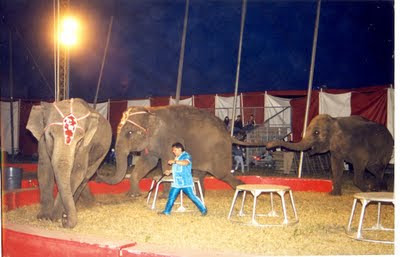 LE Barnes Circus, 2001
Courtesy of Jim Cole
"Here's a photo of the three "girls" on a walk to a clover patch on the lot in Kissimmee. Imagine my surprise, as I looked up from my car, to see three elephants without any harnesses headed right for me (so I thought). They stopped just short of me, to eat the tender blossoms of clover and the greens in the clover patch." //April Zink 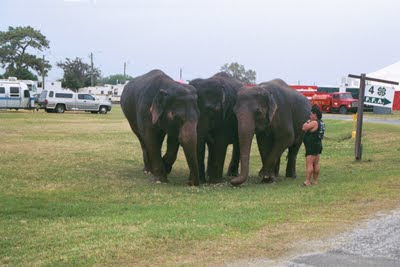