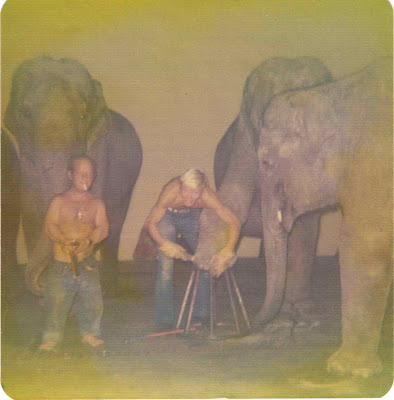 Thursday, December 30, 2010
Old Ringling Pictures
"Piccolo watching 'The Boss' giving Toby a manicure while smoking a Marlboro,
circa 1970-71." //Dieter Wichert
The elephants pictured in this photograph from the collection of Mr. Wichert are identified as Eva to the left, Toby in the middle and Baby to the right.

Toby and Baby were two of 17 elephants which arrived to America in late 1968 [Correction: Toby was not one of these 17 elephants. See commentary below.] Ringling Brothers and Barnum & Bailey Circus leased all the animal acts from Circus Williams of Germany and, under the new ownership of the Feld family, created a second unit to tour the United States. Both Toby and Baby still perform with the Ringling Red Unit to this day.

Eva was acquired the following year with two other elephants, the three of which were purchased from Wilbur Deppe along with a 12 pony liberty act. The fomer Circus World Museum performing elephant remained with Ringling until the early 1980s and was retired 13 years later to Riddle's Elephant Sanctuary in Arkansas. 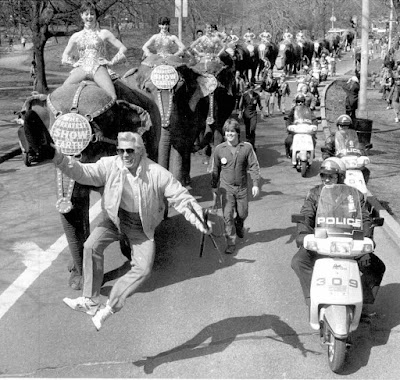 For further information regarding the Circus Williams herd and their import in late 1968, please reference the former article at ShowMe Elephants discussing the history of the original Circus Chipperfield herd.