FOR SALE - The Johnsons

An add featuring two elephants for sale was featured in a 1975 Circus Report Edition from the Johnson family. 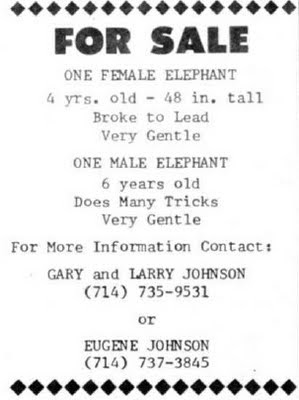 More information is sought regarding the identity of these elephants and what became of them.

The Gary Johnson mentioned for contact is the founder and operator of the California elephant business 'Have Trunk Will Travel.'

Larry Johnson is listed in the North American Regional Studbook for the Asian Elephant as owner of Safari Enterprises in Hico, Texas. However, the area code 714 listed for contact in this add are encompasses portions of Orange, Los Angeles and San Bernadino counties in California. This is near the same area of Perris, California - the location of the Johnson's current Have Trunk Will Travel and the location given for the Johnson's father, Howard, also listed in the Studbook.

The only elephants listed in the Studbook under Larry Johnson's ownership are female Asian elephant Gertie, purchased from the Sacramento Zoo around 1973 and sold to Marty Dennis of California at an unknown date and female Asian elephant Mahdgie, purchased from the Calgary Zoo in 1975 and sold to Gene Holter at an unknown date.

Eugene Johnson trained a male elephant Tommy, later sold to John "Gopher" Davenport in the early 1980s. He died on Gopher's King Royal Circus in 1990, around 18 years of age. Although the age descriptions do not corroborate, there is a possibility this is the 'very gentle' animal mentioned in the Circus Report add. From the records of Bob Cline: 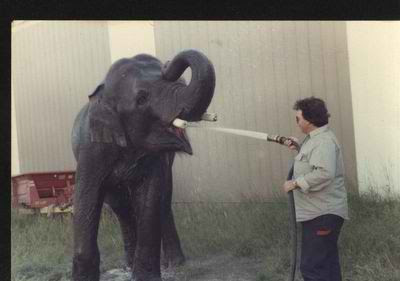