Courtesy of "May All Your Days Be Circus Days" on Facebook: 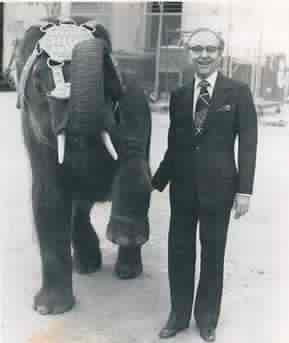 Thursday, September 1, 2011
May All Your Days Be Circus Days
"The late Irvin Feld (1918-1984)was a conflicted and difficult man. I was there and worked for him. I know. But, he loved Ringling Bros. and Barnum & Bailey with every fiber of his being. We lost him much too soon." //Jack Ryan

Ryan Easley said...
Thank you for sharing, Jack. Any idea when this photo was taken and who the elephant is?

Jack Ryan said...
LOL. I am doing Irvin and you (as always) concentrate on elephants! Bless you. Early 70s I imagine. Have no idea of the elephant's name... Buckles will know.

Dalilah Woodcock said...
Aaawww, my first love, little Charlie. Does it still count if it's Buckles daughter who answers the question? Lol

The photograph shared by Jack Ryan features young Charlie, a male who two decades later would become the primary breeding male for Ringling Brothers successful Asian elephant conservation program. The now 38 year old animal has to date sired at least 14 calves between 1997 and 2010, 12 of whom are still living.

The North American Regional Studbook lists Charlie, Studbook Number 502, with an estimated birth date of 1973, arriving to Rex Williams around 1974 and an unknown transfer date to Ringling Brothers and Barnum & Bailey Circus.

We did a lot of training those first few years, replacing old elephants with younger ones. Having been placed on the Endangered List, baby elephants could no longer be imported and the only alternatives were males already in this country.

In this case, Rex Williams had just dropped off this little guy that I named "Charlie" after Charles Ringling not Charly Baumann as some people claimed.

I am told that today, he is the principal breeding male elephant at the Ringling Stud Farm.

"Charlie" was delivered Nov. 22, 1974 completing a swap during which he received one of the Ringling elephants that he renamed "Gyp." //Buckles Woodcock 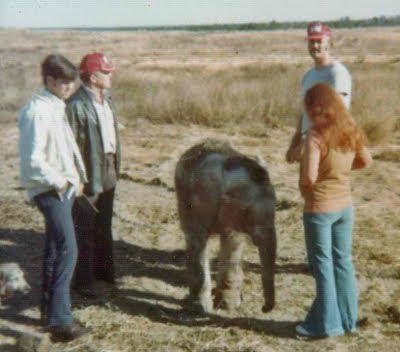 Following the closure of Circus World, Charlie worked a short time on one of the Ringling units prior to his retirement to Williston, Florida. In December 1995, Ringling's 200 acre breeding farm opened with 30 elephants near Polk City, Florida, including Charlie. He resides there to this day and is described as "gentle" with the females.

The records of Bob Cline indicate Charlie weighed 1,600 pounds in 1977 at Circus World. Wayne Jackson's records, acquired from conversations with former manager of Ringling's retirement center at Williston, Ted Svertesky, indicate Charlie had increased to 7,000 pounds by 1985. The seven foot tall animal had two foot long tusks that were each two inches thick.

Charlie's record at Elephant.se, the largest elephant database online, has been updated with this new information and the studbook keeper has been contacted as well.