IN THE 70S IN SOUTH ENGLAND I HAD THE JOB OF PICKING UP TWO FULL GROWN ELEPHANTS UP, CALLED MOTO AND TOTO FROM COLCHESTER ZOO ? NORTH ENGLAND, AND I HAD TO TAKE THEM BACK TO THE ZOO IN MARGATE KENT, WHO HAD PURCHASED THEM, ANY REFERENCE TO THIS PAIR OF ELEPHANTS. //X CHIPPERFIELDS ELEPHANT KEEPER, PETER 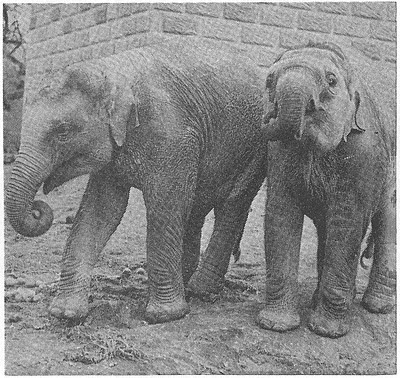 It first appears that neither Moto nor Toto are present in any online elephant databases, including Elephant.se and AsianElephant.net. This pair of animals is also not found in the European Association of Zoos and Aquaria's Asian Elephant Studbook. Elephant.se, the largest elephant database online, only lists a history of African elephants for the Colchester Zoo, beginning first with the arrival of Tanya and Zola in 1985.

Referencing ZooChat.com, a zoo community discussion forum and photo gallery site, evidence of Moto and Toto's existence was discovered thanks to information shared by fellow zoo enthusiast 'Gorotex.' The first finding was made with a photograph and description of the pair of Asian elephants cited by Peter - Moto and Toto in a Colchester Zoo Guidebook from the late-1960s. 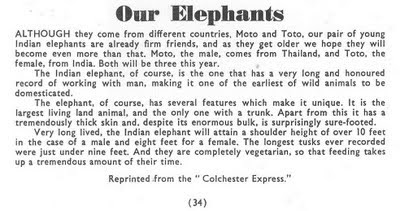 More information is discovered regarding Moto and Toto with commentary from fellow zoo and elephant enthusiast Rob Vaughan.

"The pair of Asian elephants arrived ca.1966 and were at Colchester for around five years - they appeared on a guidebook cover in the late 1960s (scan attached).

These were not Colchester's first elephants as an Asian calf named "Caroline" was pictured in the first (ca.1965) guidebook.

The African elephants arrived ca.1971, presumably shortly after the Asian departed (I have no idea what happened to them). Confusingly, both pairs of animals were called Moto and Toto (though the Asians were a bull and a cow and the Africans were two cows)." //Rob Vaughan 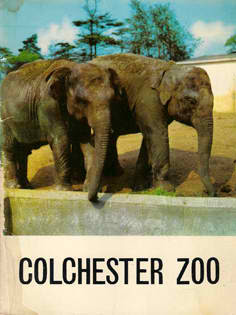 After contacting Mr. Vaughan to find more information about Moto and Toto, it was confessed that "trying to research anything on the pre-Tropeano Colchester is pretty challenging as there's very little data recorded about that era."

"The Tropeano family took over Colchester Zoo in 1983. The previous owner was Frank Farrar, an animal dealer (and one time owner of Southport Zoo) who I believe was related to the Tropeanos through marriage. As you can imagine, many animals passed through the zoo during its first twenty years (it was opened in 1963) and unfortunately there appear to be almost no written records. The only evidence available for this period comes in the form of guidebooks, postcards and the occasional personal recollection." //Rob Vaughan

To find the disposition of Peter's Moto and Toto, the lead given by Peter was followed that the elephants were purchased by a zoo in Margate, Kent. The amusement park Dreamland was discovered to occupy this city, an attraction with a long and complicated history of animal exhibition dating back to the 1870s. More research regarding this facility will be addressed in a later ShowMe Elephants article so as to not distract from the focus on Moto and Toto.

Raymond Dolling discloses much information regarding one of the many animal operations at Dreamland - The Safari Zoo of the 1970s. He also identifies the relationship building with this park and elephant holding institutions relevant to Moto and Toto - the Colchester Zoo and Dickie Chipperfield.

"The Safari Zoo was the brainchild of Dreamland MD John Iles and opened in June 1969 on the site of Sanger's original zoological garden. It lasted for 7 years but was never successful, run by a series of lesses - Dick Chipperfield of Chipperfield's Circus, Frank Farrar of Colchester Zoo, Hoffmans Circus, Bernard Bale and Al Verlaine who later opened Cleethorpes Zoo, animal dealer Mike Frewer, and Don Robinson of Scarborough Marineland who ran it as 'Birdland' and 'Wonderpark' with huge models of prehistoric creatures." //Raymond Dolling

A news clipping reprinted by JoylandBooks.com advertises the opening of Dreamland's Safari Wild Animal Park, complete with elephants among other exotic species. 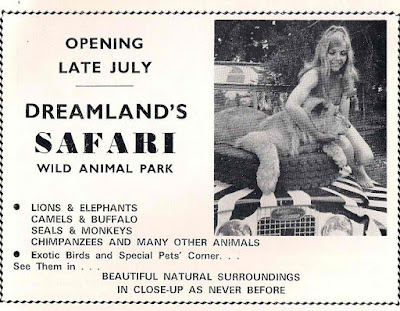 A 1970 promotional film for Margate's attractions features clips of the zoo, though pictures a young African elephant in a petting zoo setting. The Asian elephant pair is not viewed.

Rob Vaughan once again provides a lead regarding the elephants of interests.

"I'd be very interested to know what became of these two elephants: Hoffman's Circus had an Asian cow named Toto who was around the right age, but I have nothing to prove that this was the same animal (she later went to Cricket St. Thomas and is still alive and well at Wroclaw Zoo in Poland). Toto's full movements are recorded here: http://www.asianelephant.net //Rob Vaughan

Elephant.se includes this animal, with the addition of her arrival to Circus Hoffman in 1989. The EEP Asian Elephant Studbook lists Toto with Studbook Number 9003 - an estimated birth date of 1960, capture in 1989 and arrival to Cricket St. Thomas in late January 1990. This birth date is near the estimated 1964 birth date given by the Colchester Zoo 1967 Guidebook. Circus Hoffman is not included in her records. However, with the information that the Colchester Zoo, Chipperfield circus family and Hoffman circus family were all involved with the management of Dreamland Safari Wild Animal Park confirm that this is the same animal. 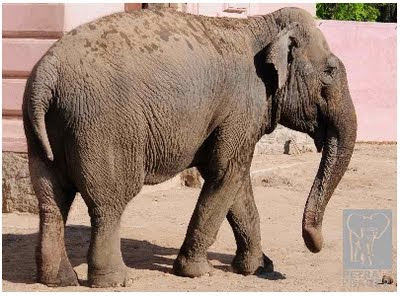 Toto, Wroclaw Zoo, 04/2008
Courtesy of Petra Prager / Elefanten-Fotolexikon.eu
All the information discovered and discussed in this article by ShowMe Elephants has thus far been updated at Elephant.se, the largest elephant database online. Asian Elephant Studbook keeper Rob Belterman has also been contacted with this information. Records will continue to be corrected as more information is provided and researched.
Posted Friday, September 16, 2011