The following picture was graciously contributed by John Romo, taken at the National Zoo in the 1980s. 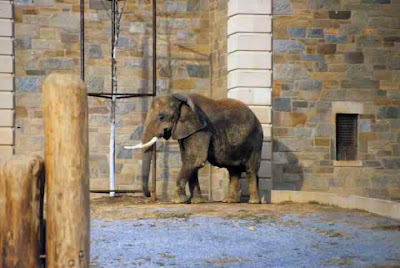 The elephant pictured in Mr. Romo's photograph was Nancy, a female African elephant imported by the Ruhe's from Tanzania in 1956 and purchased by the zoo of the nation's capital. For nearly five decades Nancy would reside in Washington D.C. until she was euthanized at the turn of the millennium for tuberculosis.

More discussion of Nancy and a more recent photograph can be found in a May 2011 ShowMe Elephants article.