These three photos were likely mixed in with the Brookfield Zoo set and are not located at the Chicago zoo. They were taken in the late 1980s to early 1990s. Perhaps details in each photo can help to identify each elephant, such as the first missing part of her tail, the second with a 'boot' on her foot and the third a younger (presumably captive-born) calf. The background scenery and fencing can also provide other clues. 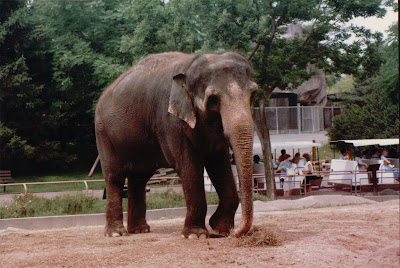 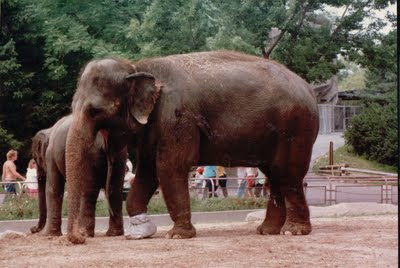 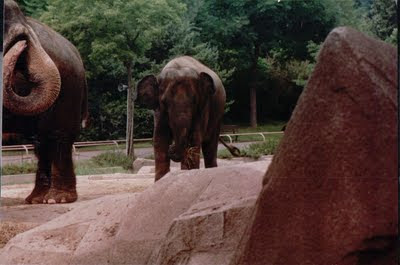 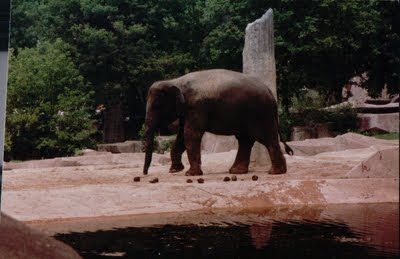 Photo 4, Mystery zoo
Photo Courtesy of M Easley
"I didn't know, I just printed what was written on the back of the photo. Thank you for the correction. There is a discussion on Ryan Easley's Show me elephants, linked on the right in relevant stops, about the identification of where an elephant ride is taking place, based on what is "written" on the back of the picture. Often times it is a guess, and not fact." //Wade Burck

UPDATED 04/27/2011:
Thanks to Danielle Faucett, these photos have been identified as the Milwaukee County Zoo. The first elephant is Lota. The elephant with the boot on her foot (Photo 2) is Tamara. The young elephant is Moola, imported in 1981 from the Burmese logging industry. Lota left the zoo in winter 1990, placing these pictures taken between Annie's return in June 1988 to Lota's departure in November 1990.
Posted Wednesday, April 27, 2011