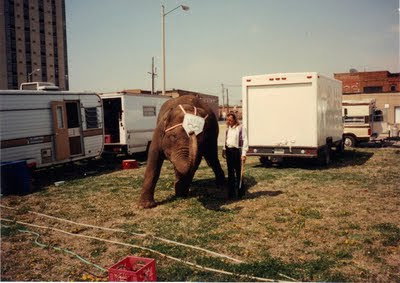 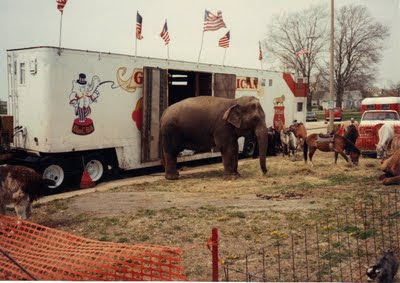 Irene's history is incomplete and contradicting from different sources. The North American Regional Studbook for the Asian Elephants (SB #523) gives her an estimated birth in 1967. Unknown dates place her first at Great American Circus in Sarasota, Florida, followed by King Royal Circus in Brenham, Texas. On August 13, 1998, she arrives at the Albuquerque Biological Park in New Mexico.

The records of Bob Cline give the following information:

ShowMe Elephants discovered several months ago, with the assistance of Bob Cline, a correction to his records - Irene was acquired by Hoxie Tucker in 1977/1978. A 1978 Edition of the publication "Circus Report" announces the loss of 'Sue' and the acquisition of a "third bull" (used in this scenario to describe an elephant, regardless of gender).


"Irene would have been the replacement. While the article is in 1978, the occurrences happened in 1977 apparently late in the year." //Bob Cline

Tavana Luvas was the show's concessions manager and performed a single trapeze act in the show for 1994. She informs that this was the last year for owner Allan Hill's show. The Eastern-traveling show opened around February and closed permanently in August. The remaining animals were sold to Gopher Davenport for his King Royal Circus.

Albuquerque city officials confiscated, in August 1998, Irene and an African female Donna from Davenport. The two animals were placed in the city's zoo. Irene still resides at the zoo, matriarch of the zoo's group of Asian elephants. The six-member herd includes two teenage males and a two year old calf.

Mike Rice, pictured in Bill Prickett's photographs, was Irene's handler for her final year with Great American. He also worked her previously with the large herd on Hoxie Brothers Circus. Mike described Irene as a wonderful elephant. She was well built, worked perfectly and could perform a hind leg walk across a circus lot. He also shared that several guys had a hand in training her, such as Dutch Crawford, John Herriott and Gary Jacobson.

Fred D. Pfening III's "The Circus Year in Review - 1995 Season," published in the March/April 1996 edition of "Bandwagon - The Journal of the Circus Historical Society" does not describe Allan Hill's show but does mention the equipment was purchased in November by D.R. Miller with the intention of framing a second unit of the Carson and Barnes Circus for the following year. The new addition would be called the Imperial Chinese Circus. 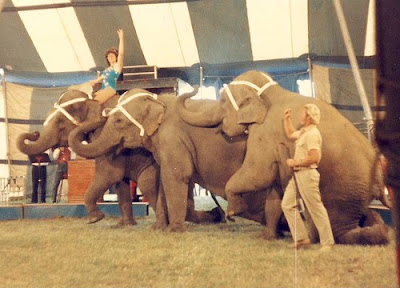 I originally put this three act together from the Hoxie herd to go to Venezuala for Jimmy Harrington. They were a super three act that did a fine routine and would become the Great American herd.

I always referred to working them like driving a Cadillac as opposed to a Model T and once again would remark that Janet was the be4st lead elephant I ever had and all three could step right out. Sadly Janet got tough, from what it seems various reasons and Kelly was electrocuted accidentally and poor Irene now is sadly wasting her time in the Albuquerque zoo.Irene did have a litle jackrabbit in her, but not serious and she pretty much got over it. But, what nice three elephants they were at the time. Too bad.

It seemed that The male Hoxie just had a turnover of too many Captains and of course being an African did not allow for too many options, but for the general routine with me he was OK and of course impressive. I doubt if he would have turned out any other way over the period of time. I believe Johnny Walker broke Janet and Kelly to work in harness and they did very well. I first used Janet as a ride elephant and she did fine. Three nice elephants to say the least and give them their due. //John Herriott