New Birth
The Toledo Zoo celebrated the birth of their second calf near midnight on Friday, June 3. The zoo had previously announced in late March their 32 year old female African elephant Renee was pregnant and due to give birth in late spring or early summer. She conceived the animal via artificial insemination with semen collected from Callee of Pittsburgh and Ajani of Indianapolis. World renowned elephant expert Dr. Dennis Schmitt assisted in the procedure and process. The yet-unnamed calf joined a herd of three – his mother Renee, his eight year old half brother Louie and 26 year old Twiggy. More information regarding the calf and photos as well will be added once released to the public. 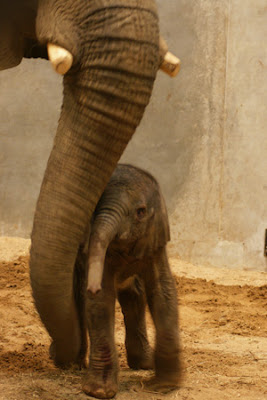 Renee and her calf, Toledo Zoo, June 2011
Courtesy of ToledoZoo.org
Louie
In early May, the zoo celebrated Louie’s eighth birthday. The party was helped with planning from elephant supervisor Don Redfox, whom returned to work in a limited capacity following his life-threatening injuries after he was attacked by Louie in 2010. Work in progress included preparation for the new elephant calf and construction of the second phase of the elephant exhibit renovation. Louie enjoyed the occasion with a 50-pound cake made of cornmeal with peanut butter frosting and celery stalks stood in for candles. 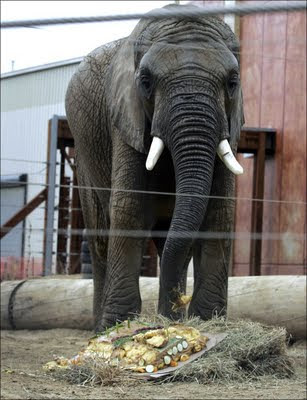 Louie, Toledo Zoo, May 2011
Courtesy of The Toledo Blade/Lori King
Renee
In mid May, the zoo received a $100,000 donation from the Eaton Corporation to be put towards Phase II of the elephant upgrades. An oversize check was ceremoniously gifted to pregnant Renee.

"The check presented to Renee was completely edible and did not contain anything that would be harmful to her. The substance on the back of the check was not glue, rather peanut butter :) And the ink on the check was non-toxic. Cardboard boxes are given to the elephants as a form of enrichment. Cardboard and paper are made from wood, which elephants are able to digest (you may often see them eating branches in the exhibit). It is not harmful to them, as they are able to digest the cellulose in wood." //Toledo Zoo

More information regarding the new facilities construction can be found at a previous May 2011 article by ShowMe Elephants. 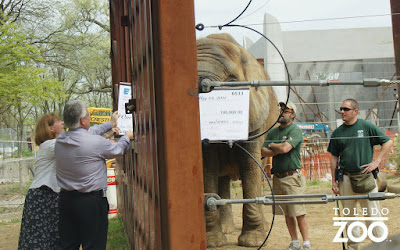 Renee, Toledo Zoo, May 2011
Courtesy of The Toledo Zoo on Facebook 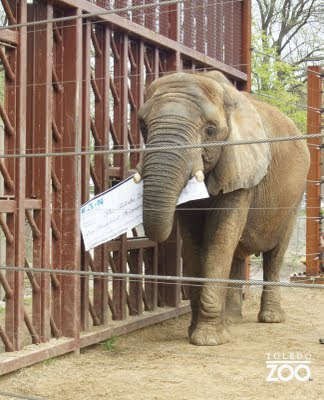