The Cleveland Zoo’s new $25 million ‘African Elephant Crossing’ five acre exhibit opened in May 2011, with two yards for the elephants, ponds for swimming, expanded sleeping quarters with sand flooring and a heated outdoor range, capable of holding up to ten elephants. Other animals will include other small African mammals, reptiles and birds. Hippos, tapirs and warthogs were reportedly cut to save the zoo $10 million. 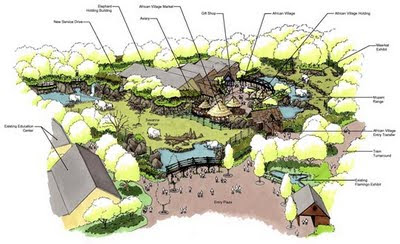 "Supported by more than a century of experience caring for elephants, Cleveland Metroparks Zoo is putting the finishing touches on a world-class elephant habitat and conservation center at the site of its 1950s-era Pachyderm Building. African Elephant Crossing quadruples the amount of indoor and outdoor space dedicated to these majestic animals and provides them with stimulating surroundings similar to their native savanna. Opening on May 5, 2011, the state-of-the-art exhibit will serve as a model for other zoos nationwide and become the Zoo's largest capital project since The RainForest opened in 1992."
Courtesy of AfricanElephantCrossing.com
The Cleveland Zoo received their first bull elephant since 1962 in April 2011 with the arrival of 32 year old Willy from Disney's Animal Kingdom. The move was recommended by the by the African Elephant Species Survival Plan of the Association of Zoos and Aquariums. The 13000 pound elephant measures 11 feet tall at the shoulder. He joined the Cleveland Zoo's four member herd of female African elephants. 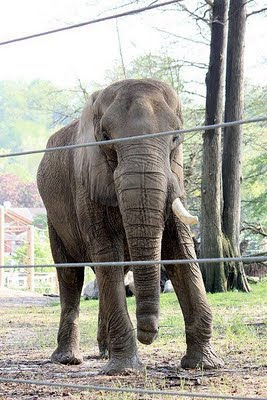 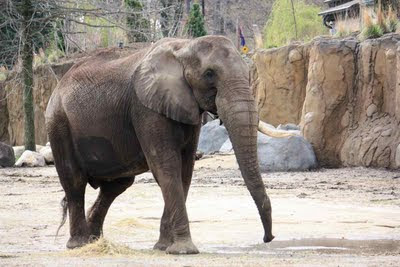