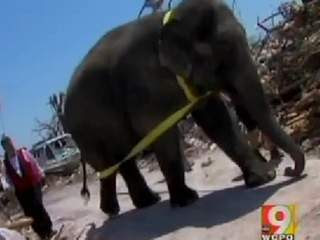 "Elephant aides in disaster cleanup efforts"
Courtesy of WCPO.com
Two comments, largely differing in their views, first appeared with this article. The first was followed by several rebuttals regarding Ms. Shenker's disagreement with the disaster relief aid from the circus.

This publicity spin for the circus disgusts me. Using abused animals, and yes ALL elephants in circuses are abused, severely and repeatedly, to clean up the abuse that nature bestowed on Joplin, is just so wrong on every level. My heart went out to the residents of Joplin until i read this; now my heart goes out to the poor elephants. Residents should be able to relate to these pachyderms, who have also lost everything, and the educated, compassionate ones do but the others... Please boycott all circuses with wild animals!

Elephants in a circus or elephants helping tornado victims are two completely different issues. If the victims of this tornado would be so rude as to boo the people and animals trying to help, this may be a broader indication of how ungrateful some people can be. Maybe all the volunteers should just help those who recognize the difference and appreciate the help and let all the ingrates fend for themselves. I find it hard to believe that tornado victims needing help would be so rude and disrespectful so it is possible that only idiots like PattyShenker have the time on their hands to put the elephants needs ahead of the tornado victims. Patty's desire to help the elephants is expressed at the wrong time and place.

It always agrivates me when people put animals above human life. To say that you don't feel sorry for the tornado victims becasue elephants are cleaning up is completely insane. I feel bad for the tornado victims (some of which I know) as well as PattyShenker and her obvious need for professional help. I can only assume that Patty is a complete sociopath to say "My heart went out to the residents of Joplin until i read this."

At least the elephants were pulling their weight, which is more than can be observed of those doing the complaining. If the circus had used their trucks to pull the car out of the debris, the same people probably would have complained about the diesel fumes destroying the planet. At least the elephants are green - and doing work they often do in India and Africa... For those complaining about the elephants -get your boots and gloves, head to Joplin and take their place! (pulling the debris, not doing tricks for kids...)