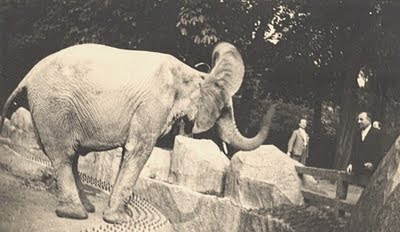 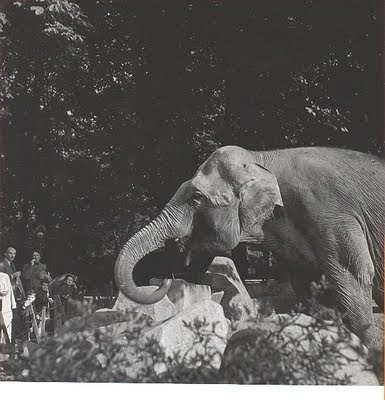 Tuesday, April 5, 2011
Vintage Vincennes Zoo Elephants
Above photo 1935, and below, 1960. Does anyone have any idea where/when the idea of spikes on the ground to keep elephants back out of the moat came about, and there were some amazingly "creative" spikes used in the past? From what I have noted it seems to have been prevalent in Germany, Russia, and Poland. Or was it an era thing more so then a national thing?
Posted by Wade G. Burck

This question posted on Mr. Burck's blog has remained unanswered. Without first referring to vintage zoo photographs, I can only list several zoos in America that used the spike barrier to prevent elephants from falling into a dry moat surrounding their exhibit, or spikes placed on rail barriers to keep elephants off the fence line.

Referring to the first picture featuring an African elephant, it appears to be an African Forest Elephant (Loxodonta cyclotis). Elephant.se does not list any African elephants located at the Paris Zoo, or Zoo de Vincennes, at the time indicated. More information is sought regarding this elephant's identity.

Two Cyclotis elephants are listed in the Paris Zoo's history at Elephant.se.

Three year old Coco / Philippe was imported from Sierra Leone in July 1963. At an unknown date, the male elephant was transported to the Sevilla Zoo in Spain. He resided there until his death in 2002. More specific information is requested regarding this animal.

Year old Jimbo was imported from Gabon in June 1970 and resided in France until October 1972. He was transferred to the Prague Zoo for four years until his death in July 1976 due to kidney and myocardium degeneration.

Update 05/22/2011
Wade has shared more information regarding the spikes and moat at the Vincennes Zoo with a 1935 article in 'Popular Science.'