In October 1959, the Smithsonian National Zoo of Washington, D.C., received a baby African forest elephant (Loxodonta cyclotis) from President Dwight D. Eisenhower, a gift to the United States of America from the President of the French Communities of the Congo Republic, Reverend Fulbert Youlou. 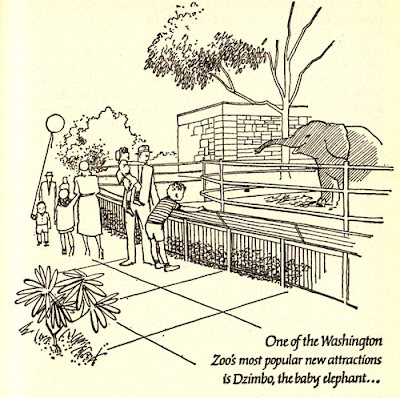 Washington, A modern guide to the Nation’s capital; Michael Frome; 1960; Doubleday.
Courtesy of djgagnon.tumblr.com
The elephant calf named 'Dzimbo,' whose name means 'tribe' in the Mang'anja language, arrived in the United States after several different plane trips. The young male was first flown to the Vincennes Zoo in Paris, France, originating from the Brazzaville Zoo in the Congo. Without the proper facilites to house the animal, President Eisenhower placed Dzimbo with the America's National Zoo. The Congo (Zaire) became independent from Belgium eight months after the gift was received by the United States. Some sources state it was President Eisenhower's Central Intelligence Agency who deposed the leader of the Belgian Congo.

"They were so anxious to express in some unique form their admiration, liking, and respect for the people of America that they sent through one of their number, Prime Minister Youlou, a baby elephant. The baby elephant, I understand, is on its way here now, and I shall have to find for it a home in one of our zoos." //President Dwight D. Eisenhower, 09/10/1959

With a herd consisting primarily of Asian elephants throughout its history since its founding in 1889, Dzimbo was kept with the African Bush elephant (Loxodonta africana) Nancy. Upon his arrival, Nancy was six years old, acquired by the National Zoo from Tanzania via L. Ruhe in 1956. 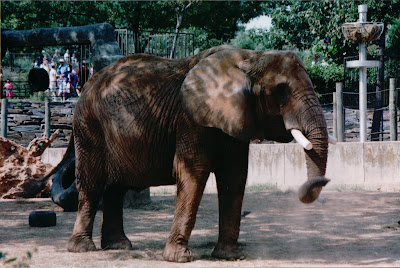 At 18 years of age, the maturing bull elephant of the National Zoo was injured by his female counterpart during a breeding attempt. The assault was described with Nancy lifting Dzimbo off the ground, his weight supported by her tusks and her trunk to keep him in place, throwing him into the dry moat. Dzimbo was shortly thereafter relocated to the Lion Country Safari drive-though park in West Palm Beach, Florida. It is reported he was kept separate from the other park elephants, which consisted of both male and female elephants of both species. Three months following his arrival, Dzimbo died of an infection-related problem from injuries incurred at the Nation's capital. 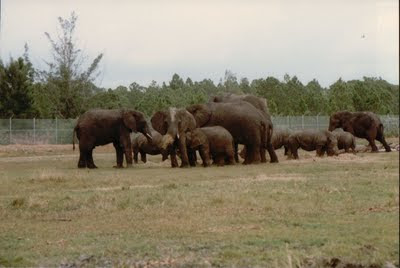 African elephant herd, Lion Country Safari, December 1983
Courtesy of M Easley
Contradictory Records
The North American Regional Studbook for the African Elephant does not list Dzimbo's previous locations at zoos in the Congo and France during his trip to America. This information was found in the "Annual Report of the Board of Regents of the Smithsonian Institution."

For Additional Information
>> "A cyclopaedic dictionary of the Mang'anja language: Spoken in British Central Africa" by David Clement Ruffelle ScottTake, Printed for the Foreign Mission Committee of the Church of Scotland, 1892, page 18, Books.Google.com

>> "Annual report of the Board of Regents of the Smithsonian Institution 1961, page 131, Books.Google.com

>> "Annual report of the Board of Regents of the Smithsonian Institution 1963, page 140, Books.Google.com

Note: Photographs
Both photographs included in this article relate to Dzimbo whether it be his former herd mate Nancy, or his final residence Lion Country Safari. Neither were taken during his lifespan, but rather posthumously. If any pictures are available of this male African Forest elephant of the National Zoo, please share to provide a more complete record of the animal's life. More information regarding his history is also sought and appreciated. 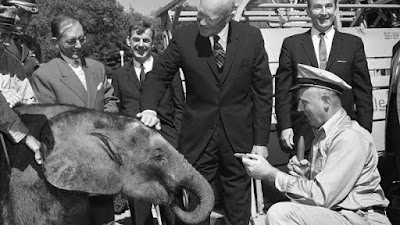 Ryan E. said...
Fantastic! Wade, your posts today are most compelling. Nearly a year ago today, I wrote an article regarding Dzimbo's gift to Eisenhower, history at the National Zoo and his later death at Lion Country Safari. At the time, I was not able to acquire any pictures of the African male. I will add the photograph you have found to Dzimbo's story.

In addition, I just learned that five days after my original post, HistoricDC.com wrote an article about presidential presents from foreign nationals. The author discusses how living creatures are outside the mandate of retaining these gifts by curators of the National Archives, telling a short story about Dzimbo and referencing ShowMe Elephants' article about the "untimely end in 1976" of Dzimbo!

Thank you for supporting this kid's enthusiasm for knowledge and history.
>> "Presidential Presents," HistoricDC.com, 05/24/2011