In December 1998, half sisters Asha and Chandra were sold to the Oklahoma City Zoo. At their new home, they were both transitioned from Free to Protected Contact. In the summer of 2008, both cows were transferred across the state to the Tulsa Zoo on a breeding loan, slated to return by the end of 2010 upon the completion of a new Asia exhibit.

The new Asia exhibit was designed as an 11 acre, $23 million dollar project due to open in 2011. The elephant exhibit will be designed as though entering Thailand and giving the elephants up to six acres of grassland, as opposed to the previous quarter acre of concrete.

A year after arriving, Asha and Chandra were introduced together to Tulsa's 36 year old bull elephant Sneezy in the summer of 2009. After behavioral changes and high hormone levels in bloodwork, Asha was confirmed pregnant when a heartbeat was detected during an ultrasound in October. It was announced to the public in December. Both returned in winter 2010 to adjust to the new habitat before its debut; only Asha returned pregnant, though both cows were observed bred by the male.

The Oklahoma City Zoo debuted their new elephant exhibit on March 11. The $13 million project boasted to be the largest Asian elephant exhibit in the country. It was funded by Oklahoma City sales taxes, except for $665,000 in private donations. Nine and a half acres for the exhibit includes three exhibit yards, a demonstration pavilion and an eight stall barn with a sand floor common area. The new habitat opened just weeks before the expected delivery of the zoo’s first baby elephant.

In mid April, the zoo took both elephants off exhibit while awaiting the birth of Asha’s calf. The expectant mother was kept in the barn’s maternity stall while her sister Chandra stayed in the community stall. 16 year old Asha gave birth to a 304 pound healthy female calf several days later on Friday, April 15. 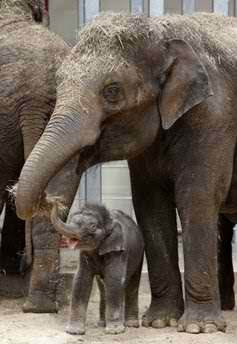 Asha and calf, Oklahoma City Zoo
AP Photo/Sue Ogrocki - News.Yahoo.com
A large compilation of news articles regarding the Oklahoma City Zoo elephant program and the first birth in the zoo's history, along with a live webcam of the animals can be found at NewsOK.com. 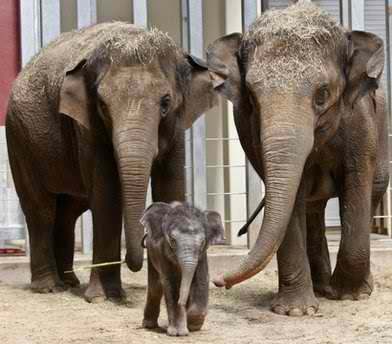